More Upheaval Is Coming to Afghanistan 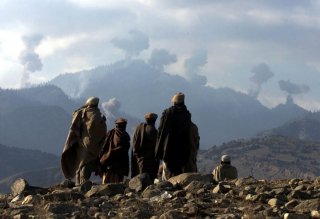 The Taliban’s swift takeover of Afghanistan, especially its capital city Kabul, with little resistance from the Afghan army has come as a shock to the world and Afghan people alike. Few observers, including American officials, could see it coming this soon or imagine the well-trained and heavily-equipped Afghan military crumble so fast against swarming but lightly-equipped and ill-trained Taliban fighters. It was only over a month ago that President Joe Biden and his foreign policy officials were denying the possibility of the fall of Kabul in light of the Afghan government’s superior military force and effective airpower. Why this outcome unfolded requires careful investigation and merits a separate analysis of its own. But the reality of the Taliban’s present control over Afghanistan demands urgent attention. The international community needs to devise short-term and long-term strategies to alleviate the suffering of the Afghan people and push the parties toward reaching a fair and durable solution to Afghanistan’s enduring political instabilities and security predicament.

Today, public sentiments in Kabul and other Afghan cities toward the Taliban takeover, as reflected in citizens’ reporting, is a mix of panic, shock, helplessness, anger, uncertainty, and relief. The memories of the Taliban’s brutal rule in the 1990s and the stories of its conduct in recent years have fed into widespread fears and anxieties among many Afghan citizens. Women, ethnic and religious minorities, intellectuals, and the political and security cadre of the collapsed Afghan government have the most to lose from Taliban rule as the group is expected to impose their own strict reading of the Islamic Sharia law on society and to punish the collaborators of the ancien regime. The flood of many thousands of Afghan people to the Kabul airport in recent days and their frantic attempts to flee their country by any means reflect this dominant mood among these segments of Afghan society.

Afghans’ weariness and frustration over four decades of foreign occupation and civil wars, daily scenes of violence and bloodshed, and the incompetence and corruption of their government have ironically led some of them to see the Taliban as their saviors. Thus, some Afghans welcomed the Taliban’s entry into Kabul and other major cities. These Afghans see the Taliban’s victory and dominance as heralding the end of insecurity, instability, and corruption. But for other Afghans, the future is simply fraught with uncertainties as they wonder how the Taliban may rule and how other actors will react to that.

These uncertainties in fact bear directly on the future course of Afghanistan’s crisis. The prospects of peace and security in Afghanistan largely hinge on the nature of the upcoming political order: how the Taliban will rule the population and how much, if at all, it will be willing to share political power with other groups, and how other domestic political groups, as well as regional and global actors, respond to the new reality in Afghanistan. With the Afghan government and military collapsed and the United States and other foreign military forces withdrawn from Afghanistan, the triumphant Taliban have little incentive to share power with other political groups. As such, it is expected to only integrate a few like-minded political figures and groups in the new power structure to give its regime a semblance of pluralism. The Taliban will likely also slightly relax some of its old restrictions on women’s social presence and education and exhibit more tolerance toward religious minorities to repair its public image and smoothen its transition to power, as the Taliban have been signaling over the past several days. But these symbolic changes and gestures will not be enough to satisfy the young Afghan generation who grew up in the social and political freedoms of the post-Taliban era and avert political and military rebellions by marginalized ethnic groups, mainly Tajiks, Hazaras, and Uzbeks, led by disgruntled warlords, as well as the secular elements of the Taliban’s own fellow Pashtuns.

Given Afghanistan’s multi-ethnic composition and tribal politics coupled with its mountainous terrain which impedes effective control by its central government, it is virtually impossible for a single ethnic group to establish more than a shaky control over the entire Afghan population, as modern history also testifies. As such, it will be only a matter of time before armed rebellions emerge against the Taliban in different regions of Afghanistan, especially in the north. This scenario becomes more likely if the interests of Afghanistan’s major neighboring countries or other regional or global powers also clash with the Taliban’s rule.

To prevent Afghanistan from falling into endless civil wars and put an end to the long-lasting suffering of Afghan people, it is imperative for regional and global actors to pressure the Taliban toward compromise and put all their efforts into finding a durable solution to the country’s political crisis. In light of recent developments, it may be tempting to feel fatalistic about the prospects of the Taliban domination over Afghanistan. However, it is still not too late to reverse at least some of the Taliban’s military gains and prevent it from consolidating its grip over the entire country by supporting the emerging northern opposition movement and presenting the credible threat of military intervention by the United Nations Security Council. The international community will also maintain considerable leverage in the form of economic aid and trade relations with Afghanistan, which can be used to mount pressure on the fledgling Taliban regime. Without applying these different avenues of pressure, the Taliban will lack the necessary incentives to agree to a fair and durable political settlement to the crisis.

Abolghasem Bayyenat is currently a postdoctoral fellow at Harvard University’s Belfer Center for Science and International Affairs. His earlier writings on regional foreign policy developments can be accessed on his website at www.IranDiplomacyWatch.com.