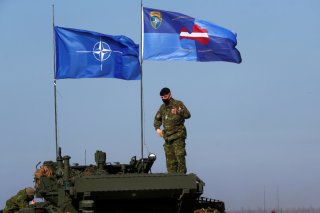 Europe is closer to war today than at any time since the collapse of the Soviet Union. During his recent press conference, U.S. president Joe Biden asserted that Moscow had the necessary forces in place to conduct a major conventional land assault on neighboring Ukraine. Even if warnings from Biden and Western leaders can deter Moscow from acting on Putin’s threats this time, it is clear that both the United States and its NATO allies will have to enhance their conventional forces if they want to maintain the ability to deter Russia.

NATO countries can build up their military forces and simultaneously send a message to Moscow by acquiring additional U.S. military equipment. A number of NATO allies are buying the fifth-generation F-35 stealth fighter. But it would help if more of them acquired U.S. land systems such as the Joint Light Tactical Vehicle (JLTV), M1 Abrams tanks, and the HIMARS rocket system.

NATO largely failed to respond as the Russian military undertook a decades-long modernization program, the results of which are now deployed within striking distance of Kyiv. Moscow’s push for modernization focused on all elements of Russian conventional, strategic, and nuclear forces. Moscow built a robust Anti-Access/Area Denial (A2/AD) capability centered on interlocking air and missile defenses and an array of precision-guided ballistic and cruise missiles.

Following the collapse of the Soviet Union, NATO essentially eviscerated its conventional force posture. The United States reduced its once-mighty presence in Europe to two relatively weak light brigades. Major NATO allies, including Germany, the UK, and France, shrank the size of their land forces. While Russia intensively modernized its ground combat capabilities, NATO focused on counterterrorism and allowed its high-end conventional warfare capabilities to age and sometimes become obsolete.

The United States and NATO only began to reverse this decline in conventional capabilities after Russia seized Crimea and invaded eastern Ukraine in 2014. At its Wales Summit that year, all NATO nations committed to spend at least 2 percent of their individual GDPs on defense within a decade.

One area where the alliance has been pursuing a sustained modernization effort is in fifth-generation fighters. The UK, Italy, the Netherlands, Norway, and even Poland are acquiring the F-35. Switzerland and Finland, both of which are neutral countries, also recently announced that they were entering the Joint Strike Fighter club. The F-35 is on the verge of becoming Europe’s dominant fighter for decades to come.

However, the alliance’s modernization of its conventional land forces has continued to lag. NATO defense experts once argued that this was not a problem because conventional aggression across land borders in Europe was no longer a possibility. Unfortunately, 2014 proved them wrong.

To compensate, the U.S. Army has undertaken a major modernization effort designed to enhance its posture for high-end conflict in Europe and the Indo Pacific. It has undertaken the first complete modernization of its armored brigade combat teams (ABCTs) in decades. These formations will be receiving the upgraded M1A3 Abrams tank, Paladin PIM 155mm self-propelled howitzers, the Joint Light Tactical Vehicle (JLTV), and the Armored Multipurpose Vehicle.

The United States is also returning land forces to Europe. The U.S. Army began rotational deployments of an ABCT to Poland. Last year, the Pentagon decided to expand this effort by adding a forward-deployed division headquarters, pre-positioned equipment for a second ABCT, logistics units, and an MQ-9 Reaper drone squadron in Poland. The Pentagon reactivated the Army’s famed V Corps headquarters to manage its larger force posture in Europe. Moving the headquarters of U.S. Army Europe to Warsaw could send the Kremlin a clear deterrence message.

Poland is one ally that has made good on its commitments to the alliance regarding defense budgets and military modernization. Warsaw has also used the opportunity to draw closer to the United States. In addition to spending in excess of the 2 percent mark on defense and undertaking a major military modernization program, Poland has opened itself up as a place where the United States can deploy rotational forces and build up prepositioned stocks.

Soon after joining NATO, Poland began to upgrade its Soviet-era air force with American F-16s. It is now adding thirty-two F-35s to its aerial force posture. In addition, it has acquired the American Patriot air defense system and the HIMARS rocket artillery system. Warsaw has also asked to acquire 250 M1 Abrams tanks. The Biden administration needs to move forward rapidly on this request.

Our NATO allies would be wise to focus their modernization efforts more on land forces, and in this context, on acquiring U.S. military hardware. One system that could be widely employed in Europe is the JLTV. This twenty-first century vehicle, which the U.S. Army and Marine Corps are acquiring, provides enhanced mobility, survivability, sustainability, and combat power while also being easier to operate and sustain than current generation light tactical vehicles.

The JLTV is perfectly suited to the European land warfare environment. Several European countries, such as the UK, Belgium, Lithuania, Slovenia, and Montenegro, have all agreed to acquire the JLTV. The weapons carrier version could mount a variety of anti-tank and anti-aircraft weapons, posing a significant challenge to the Russian Army. The rest of the countries on NATO’s eastern flank, including Poland, should seriously consider adding the JLTV to their vehicle fleets. This would enhance interoperability with U.S. forces and improve the performance of local militaries. Furthermore, the United States should consider offering the JLTV to Ukraine.

The Army plans to begin fielding the fruits of its “31+4” modernization program in the next few years. The United States could create its own NATO-centric A2/AD capability centered on offensive weapons, such as the Extended Range Cannon Artillery, the Precision Strike Missile, the Mid-Range Missile, and defensive capabilities like the Maneuver Short-Range Air Defense system and the upgraded Patriot with the new GhostEye radar. Several of these systems could be immediately sent to Europe to assist in deterring Russia. Washington should consider selective sales of these advanced weapons to key NATO allies.