More U.S. Troops Will Be Deployed to Eastern Europe 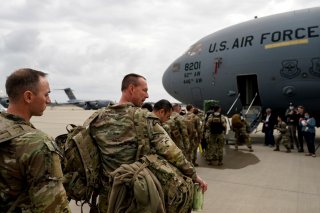 The Department of Defense announced on Monday that 500 additional troops would be deployed to Europe in the coming days, bringing the total number of U.S. forces on the continent to roughly 100,000.

Pentagon spokesman John Kirby indicated that the decision to deploy additional troops had been brought about by rising security concerns in Eastern Europe, particularly the deepening conflict in Ukraine. While the administration of President Joe Biden has repeatedly dismissed the possibility of deploying U.S. troops inside Ukraine and withdrew existing troops from Ukraine well in advance of the fighting, it has stationed additional deployments in neighboring NATO nations, including Poland and the Baltic states.

Although Russian troops made early advances into Ukraine from the north, south, and east, they have encountered ferocious resistance from the country’s defenders, and their advance has largely stalled due to poor logistical support and low morale. Nearly all Russian forces stationed along the border with Ukraine have been committed to the invasion, and some estimate that Russian troops have lost around 25 percent of their equipment in combat since the onset of the fighting.

In the same press conference, Kirby also warned that Russia has resorted to hiring Syrian mercenaries to supplement its troops in Ukraine. “We do believe that the accounts of the Russians seeking Syrian fighters to augment their forces … we believe there’s truth to that,” the spokesman said, although he acknowledged that the Defense Department did not have any insight into the number of mercenaries involved, their combat experience, or their expected salaries.

Russian leader Vladimir Putin has repeatedly promised to end the invasion—or “special military operation,” as the Kremlin has described it—if Ukrainian president Volodymyr Zelensky agrees to commit Ukraine to a politically neutral status between Russia and the West, recognize the independence of the two pro-Russian separatist groups in the eastern regions of Donetsk and Luhansk, and acknowledge Russian sovereignty over the Crimean Peninsula. So far, Zelensky has rejected these demands, describing them as a violation of Ukrainian sovereignty.

The Ukrainian leader has also repeatedly pressed the West to impose a “no-fly zone” over Ukraine, which would prevent Russian jets and drones from striking cities. However, Western leaders have rejected this course of action, noting that it could lead to direct conflict between NATO and Russia and potentially lead to a nuclear exchange.