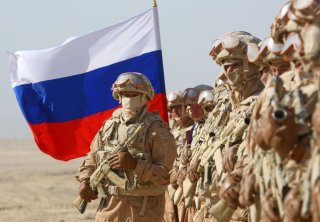 Nearly two months after the withdrawal of essentially all Western forces from Afghanistan, Russia has made it crystal clear that it doesn't want to see any foreign military build-up in the region. On Wednesday, Moscow called on countries neighboring Afghanistan not to host any international military forces—and named the United States and NATO specifically.

"We call on Afghanistan's neighboring countries not to allow a military presence of U.S. and NATO forces that plan to move there after leaving Afghanistan's territory," Foreign Minister Sergei Lavrov said during a video conference held in Tehran.

The conference, which focused on the state of Afghanistan, also had representatives from China, Iran, Pakistan, Tajikistan, Turkmenistan, and Uzbekistan in attendance, Reuters reported. Russia has been increasingly worried about terrorists claiming to be refugees who are now moving throughout the region and could carry out attacks against Russian interests; as well as Western powers expanding their presence in the region, much of which was once part of the Soviet Union.

While independent, the nations of Central Asia are still viewed by Moscow as a defensive buffer to Russia's south.

Since the Taliban takeover in August, the Kremlin has increased its military presence in the region. It houses one of the largest foreign military bases in Tajikistan, which maintains a long border with Afghanistan. The two countries have become close regional partners.

Those drills followed even larger drills. On October 18, the post-Soviet security bloc kicked off both the Echelon 2021 and Search 2021 special drills and the Interaction 2021 joint maneuvers at the Kharbmaidon training ground in Tajikistan as part of the Collective Security Treaty Organization's (CSTO's) Combat Brotherhood 2021 operational and strategic exercise. More than four thousand troops from Russia, Belarus, Armenia, Kazakhstan, Kyrgyzstan, and Tajikistan along with some five hundred items of military hardware conducted joint operations to "thwart an attack by notional terrorists."

The CSTO is made up of member states Armenia, Belarus, Kazakhstan, Kyrgyzstan, Russia, and Tajikistan, while Afghanistan and Serbia have each been observer states since 2013.

However, despite Russia's strong words to the United States and NATO this week, over the summer Russian president Vladimir Putin had offered the United States the use of Russia's military bases in the same region, according to reporting by Russia's Kommersant newspaper.

While Russia has made it clear that it doesn't want to see Western powers maintaining a presence in the region, Moscow seems willing to let Beijing expand. Perhaps this is because of the growing partnership between Russia and China, or perhaps Moscow just accepts the reality that Beijing is going to move in and there is little to stop it. China is looking to forge closer relations with the Taliban, but it may not be prepared for everything that comes with it. And even if Russia is content with letting China maintain a presence in Central Asia, it isn't likely that Al Qaeda or other elements in the region will greet the Chinese with open arms.