The Mosin Nagant is a Common Firearm, But It Might Not Be For Newbie Shooters 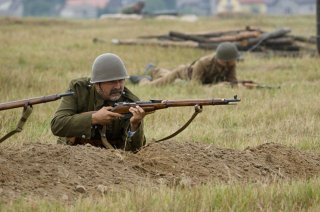 It is impossible to walk into any large gun show today and not find at least a few Mosin-Nagant rifles for sale. A decade ago hundreds of thousands, perhaps even millions, were exported from Russia and Eastern Europe, and those old bolt action rifles—most of World War II vintage—flooded the market. During the peak years, an original Mosin-Nagant that likely saw use in the Soviet's "Great Patriotic War" could be found for less than $200. It was considered a bargain as American M1 Garands were fetching nearly $1,000 and even well-used German Kar 98K rifles were often double that of the Soviet rifles.

While those good old days are largely a thing of the past, as savvy collectors snapped up the best ones, the Mosin-Nagant is hardly a rare firearm these days. Dozens can be found via online auctions such as GunBroker.com, and as noted the rifles are readily found at gun shows across the country.

Because of the low cost, ease of maintenance, and until recently the readily available ammunition, many Mosin-Nagants were no doubt purchased as a "shooter"—that is to say a rifle to actually take out and shoot as opposed to displaying on the wall.

As I can attest, those unfamiliar with the Mosin-Nagant may be in for a seriously rude awakening.

Anyone expecting a "fun" gun to shoot should expect that this Russian-designed firearm is going to kick like a horse. That is because it was designed to be chambered in 7.62x54mmR, which originally was introduced as a service cartridge in 1891. It was quite literally designed to kill a man at range—as most military calibers were and still are designed to do.

Soldier comfort has always been an afterthought, but in the Tsarist era, the Russian military truly didn't think (or care) much about whether the rifle was enjoyable to shoot. In fairness, most .308/30-06/8mm firearms have a kick as well. It is something those who like to shoot understand, and are prepared to deal with.

One of the benefits of the Mosin-Nagant is that it is a reasonably accurate rifle, even if it was unlikely to have been used by a marksman like Vasily Zaitsev in the film Enemy at the Gates. (And the truth is that most of Zaitsev's exploits were greatly exaggerated) Mass-produced military rifles weren't designed by sporting companies, but instead were the result of teams of engineers with massive government resources and designed for "life-and-death purposes."

The Mosin-Nagant was introduced in the 1890s and remained in service in both World Wars, was used in the Russian Revolution, subsequent Russian civil war, and dozens of other conflicts. It was designed to be well-balanced and while perhaps heavy compared to the AK-47 and other later Soviet-designed small arms, the Mosin-Nagant was produced in the millions because it was reliable, accurate and simply put, got the job done.

Just don't expect it to be a fun gun to shoot unless you know what you're getting into. And hopefully, given the recent calls for bans on Russian-made ammunition, you can actually still find the good stuff to use with the Mosin-Nagant at the range.