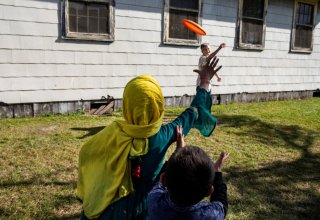 America’s immigration policy has long been and continues to be a subject of intense partisan contention. Despite the polarization associated with the broader immigration debate, however, a poll released on Monday showed that most Americans across the political spectrum favor resettling Afghan refugees who assisted the U.S. mission there during that nation’s twenty-year war.

The poll, conducted jointly by the Associated Press and the NORC Center for Public Affairs Research, found that seventy-two percent of Americans supported Afghan refugees’ asylum, including seventy-six percent of Democrats and seventy-four percent of Republicans. The poll found that only nine percent of survey respondents were opposed, with the remaining portion unsure.

The poll only asked about Afghan refugees who had served the U.S. government during the war; it left open the question of whether other refugees should be allowed to enter. However, some respondents underscored the need for vetting, to ensure that no Afghan refugees resettled in the United States would become a security risk. Prior to the evacuation, Al Qaeda and the Islamic State’s “Khorasan Province” (ISIS-K) maintained a small but active presence in the country, raising the possibility for some of a jihadist threat.

More than 100,000 Afghans were evacuated from the Hamid Karzai International Airport in August 2021, making the Kabul airlift the largest in history. Most of them were taken to Al Udeid Air Base in Qatar, and from there, thousands were transported to the United States, where they reside on military bases pending legal clearance to enter.

In recognition of this fact, Congress passed a resolution on September 30 including more than $6 billion for further funding for Afghan refugees.

Americans’ attitudes toward Afghan refugees are in marked contrast to the prevailing view of other migrants, thousands of whom President Joe Biden deported in September. In general, asylum seekers on the Mexican border, including the Haitian refugees subjected to deportation, have been regarded with greater skepticism than Afghans, but tend to still be viewed sympathetically. A September 29 ABC/Ipsos poll revealed that fifty-eight percent of Americans support allowing them to remain in the United States before their asylum cases were brought to court.

This finding revealed a significant partisan divide, with eighty-three percent of Democrats in favor of allowing asylum seekers to remain, compared with only twenty-seven percent of Republicans.