On the Move: The Marines Are Retooling for War in the Indo-Pacific 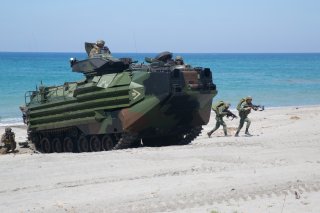 The move is part of a once-in-a-generation shift in the U.S. Marine Corps, a plan pushed by the Commandant of the Marine Corps, Gen. David Berger, called Force Design 2030. The force redesign moves the service away from the long, grinding land campaigns that defined the U.s. Marine Corps’ involvement over the last two decades in the Middle East and retooled for an anticipated twenty-first-century conflict in the Asia-Pacific region.

“This is a significant moment in Marine Corps history,” stated Col. Timothy S. Brady, commanding officer of the 3rd Marine Littoral Regiment, in a statement covering the event.

“This transformation began two years ago when the Commandant of the Marine Corps laid out his guidance for the force of the future in Force Design 2030. Force Design 2030 is not static. We will continue to change and adapt through experimentation and training. We’ve been doing it since 1775, and nobody does it better than the United States Marines.”

The statement further explained that the new unit is “purpose-built to integrate with naval platforms and units and to enable joint and allied organizations. 3rd LCT will conduct reconnaissance and counter-reconnaissance, employ and enable multi-domain fires, and establish expeditionary sites to support a naval expeditionary force’s maritime campaign across the competition continuum.”

As a part of the Force Design 2030 shift, the U.S. Marine Corps has divested a great deal of equipment that is not optimized for a fight in the littoral regions of the Asia-Pacific region. Along with all tank battalions, the service has also divested much of its artillery and tube mortar capabilities to become highly decentralized and mobile while conducting maritime operations.

“We are happy to join this new formation,” stated Lt. Col. Osman Sesay, the commanding officer of Combat Logistics Battalion 3. “We are ready for the future; we are ready to train. We are showing up, ready to enhance the MLR’s number one priority: warfighting.”

“Through all of this change, one thing will always remain the same: our Warrior Ethos,” stated Col. Brady. “We are more lethal today than we have ever been in our history. We stand prepared and ready to fight now as part of the 3rd MLR and 3rd Marine Division.”