Move Over Aluminum: Why the U.S. Navy is Turning to Steel Ships 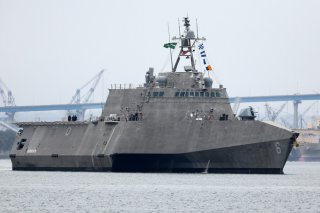 It is a well-known paradox: In order to prepare for peace, prepare for massive maritime warfare with heavily armed surface ships, long-range weapons, and layered defenses. This is the conceptual basis for deterrence, a strategic approach grounded in the idea of strengthening military power for the ultimate purpose of preventing conflict on the open ocean.

With this in mind, the Navy is taking new strides in its ongoing, multi-year ambition to build a larger, stronger, more heavily armed, and distributed surface fleet. It intends to do this in part by potentially migrating some of its shipbuilding initiatives away from large surface vessels and more toward a smaller agile fleet. Concurrently, the service is also moving at an ambitious pace to add greater numbers of larger-platform warships to include amphibs, destroyers, and frigates, among others. With a desired fleet of 400-500 ships in mind, the Navy is pursuing efforts to transition to more steel building materials and to substantially rev up shipyard production capacity throughout the industrial base.

Now, a bipartisan group of lawmakers on the Hill is seeking the same thing through a new legislative proposal to add billions in new funding for U.S. shipyards.  Representatives Rob Wittman (R-VA-01) and Mike Gallagher (R-WI-08), along with Senators Roger Wicker (R-MS), Tim Kaine (D-VA), Susan Collins (R-ME), Angus King (I-ME), and Jeanne Shaheen (D-NH) introduced the Supplying Help to Infrastructure in Ports, Yards, and America’s Repair Docks (SHIPYARD) Act of 2021, which would provide $25 billion to make investments needed to optimize, improve, and rebuild shipyard facilities, electrical infrastructure, environmental systems, and the equipment of public and private shipyards in the U.S. that support the U.S. Navy fleet.

Austal USA just announced it is investing more than $100M to add steel shipbuilding capabilities to its facility in Alabama to adjust to the changing demand.

“Our intent is to build what the Navy needs. We’re taking our proven processes that have led to consistent on-time, on-budget delivery and building them into a new steel line,” Larry Ryder, Austal USA’s Vice President of Business Development and External affairs told The National Interest in an interview. “In April 2022, we’ll be cutting steel with the goal to support the Coast Guard’s and Navy’s call for steel ships.”

The urgency of improving the combat readiness and capability of manned surface ships is not lost on members of Congress now deliberating fleet size and configuration questions with a specific mind to concerns about the Chinese Navy. Particularly in light of the increasing capacity with which they will operate unmanned systems such as surface, undersea and aerial drones. Building more new ships out of steel appears to be an integral part of this effort.

“Fleet size considerations need to examine a combination of capacity and capability. So, it's two factors. It's not only quantity, but it’s quality. You know, for years, we looked at the Chinese and said, ‘they got quantity, but they don't have quality.’ Well, let me tell you, the Chinese have quality now,” Rep. Rob Wittman -(R) Va., ranking member on the House Armed Services Committee Subcommittee on Seapower and Projection Forces, told The National Interest in an interview.

Austal USA, which constructs the Littoral Combat Ship Independence-variant and Expeditionary Fast Transport-maker, is one of several prominent shipbuilders planning to help “lead the resurgence” back to steel.

“The key is that we are not losing the aluminum capability. By adding steel, we will extend our position. We are a lean, modular manufacturing facility and have the ability to build both steel and aluminum. We have the capacity in our shipyard now to support the growth of the Navy and Coast Guard fleets,” Ryder explained.

Austal USA’s move to incorporate steel materials for ship construction is intended to address several emerging Navy interests being pursued for some of its new programs. These include the now-in-development Light Amphibious Warship, frigate follow-yard, and Coast Guard Off-Shore Patrol Cutter.

Ryder’s point is consistent with the sentiments expressed by the proposed legislation which appears to be a clear response to the Navy’s growing need to add more warships at a much faster pace, as well as to use properly supplied, existing, and new shipyards. Austal’s move, something likely mirrored by other shipbuilders as well, seems to anticipate this.

“Our shipyards’ aging infrastructure fails to provide the capacity, configurations, or equipment necessary to maintain fleet readiness. These factors have not only resulted in a maintenance backlog amongst our current ships but have left us ill-prepared to grow our Navy to keep pace with China,” Wittman said in a statement.