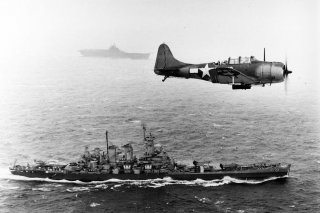 The Second World War was not won or lost due to a single battle, nor did one new weapon or secret tool sway the outcome. There were countless innovations that played a role, and while some—such as radar and the atomic bomb—are widely remembered, there were other tools that helped ensure victory in other ways. Among the largely overlooked innovations that likely saved untold thousands of lives was the Allies "tide prediction machine."

Without this technology the D-Day landings on June 6, 1944, could have ended in disaster.

The necessity for such a device came about after the Dieppe Raid, which was conducted in August 1942 to determine if the Allies could seize and hold a major port, even for a short period of time. None of the objectives of the raid were met and this influenced preparations for future seaborne operations, which would have to take place on open coastline.

The Allies had put serious consideration into where the invasion of Nazi-occupied Europe should occur, but it was up to British oceanographer/mathematician Arthur Thomas Doodson to provide the when.

For any amphibious landing to be successful the invaders would need to be able to predict the height and timing of high tide. The U.S. military planners had learned a valuable and costly lesson at the Battle of Tarawa in the Pacific when a miscalculation in predicting the height of the high tide resulted in U.S. landing craft becoming stranded on shallow reefs for hours.

Tides have always been extremely hard to predict, and even after Sir Isaac Newton discovered that ocean tides are driven by the gravitational pull from the Earth's moon and sun. French mathematician Pierre-Simon Laplace expanded on Newton's work by integrating tidal motion into the equation, but it remained guesswork rather than a true prediction.

Determining the tide across the channel at the site of the invasion would be hard to pinpoint and it required fairly complicated math but also a device to help aid the predictions. The first tide-predicting device was designed in 1873 by Sir William Thomson (later Lord Kelvin), and it was produced under the auspices of the British Association for the Advancement of Science.

However, the Allies needed a machine that could be far more accurate as lives were literally on the line. The tidal difference at Omaha beach was as great as six meters!

In October 1943, Doodson, who was head of the Liverpool Tidal Institute, was contacted by his friend Commander Ian Farquharson of the Royal Navy. Doodson and his tide-prediction machine had already been supplying the Allies with information that were crucial to launching an invasion, but Farquharson needed far more specific information about an undisclosed location—known simply as Position Z. That turned out to be the northern coast of Normandy, where Farquharson had sent two-manned submarines to take water measurements to help predict the tides at potential landing sites.

In an era before computers, the tide-predicting machine was an extremely complex invention that took years to develop. It could take into account an immense amount of data and with it Doodson was able to identify the three ideal days for a landing in early June. While weather delayed the scheduled June 5 landings, Doodson's calculations still ensured that the Allies had the right window for a low tide landing.

Allied planners also consulted with meteorologists in the days and even hours leading up to the invasion, and this included gathering data from weather stations in Canada, Greenland and Iceland as well as from weather ships and flights over the Atlantic. The weather wasn't ideal—and it caused some paratroopers to land miles off target while rough seas caused some landing craft to capsize—but German forecasters believed the stormy conditions wouldn't weaken for at least a week. The Germans were caught off guard and the Allies secured a beachhead. It couldn't have been done without Doodson's machine and ability to crunch the data to pick just the right time in June.