Move Over Murder Hornet, The Black Hornet PRS is Coming 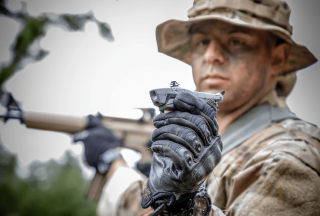 There is new concern over the so-called “murder hornet,” a potentially deadly insect spotted in Washington state in recent weeks. Measuring up to 2-inches long, the hornets have been known to wipe out bee colonies within hours. But a far more advanced “Hornet” could be making the rounds—and while not actually armed, it could have the potential to be quite deadly to America’s enemies.

It is the FLIR Black Hornet PRS, an airborne personal reconnaissance system (PRS) for dismounted soldiers, that could be a set of eyes in the sky. Extremely light, nearly silent and with flight time up to 25 minutes, this pocket-sized nano drone could bridge the gap between aerial and ground-based sensors. The Hornet is able to transmit live video and HD still images back to the operator.

The project, which was initiated in April 2008, has gone through several test flights and extensive testing before it entered the serial production phase in early 2012. This month FLIR systems announced that it has won an additional $20.6 million contract from the U.S. Army for the Black Hornet 3 PRS, which could support platoon and small-unit level surveillance and reconnaissance capabilities as part of the Army’s Soldier Borne Sensor (SBS) program.

In January 2019, the Army had awarded FLIR an initial $39.7 million contract to support the SBS program, and the company is currently delivering the Black Hornet 3s for fielding across the service. Deliveries of the latest contract will begin later this year.

“Black Hornet has proven to be a game-changing technology—a small package that can deliver a big edge on the battlefield,” said Roger Wells, FLIR’s vice president and general manager of unmanned systems and integrated solutions. “We’re proud to continue supporting the U.S. Army’s Soldier Borne Sensor program. Enabling warfighters with a full range of integrated unmanned solutions, both in the air and on the ground, is a strategic objective FLIR shares with the military.”

The Black Hornet is constructed of a rugged, plastic-molded shell and it utilizes an aerodynamic shape that can even withstand stormy winds. Each of the Hornets is fitted with three surveillance cameras that are concealed within its nose. While it lacks any offensive weapons, which would be impractical given its size, it is small enough and silent enough that it could locate enemy positions or track movement from overhead, giving small units truly advanced situational awareness.