Move Over Osprey: The Army's New Tiltrotor Chopper Is Ready for Combat 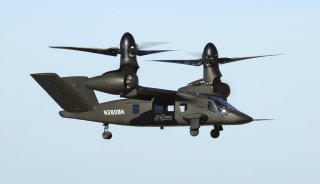 Years ago, the U.S. Army’s vision for its fleet of Future Vertical Lift helicopters and aircraft was intended to engineer platforms that could operate in a dangerous threat environment in the 2030s and not focus on the near term when it comes to the development of paradigm-changing new aircraft.

As part of this, the U.S. Army's vision for its future rotorcraft is grounded in extended sustainability, meaning the aircraft will need to be both maintained and upgraded for decades moving into the future.

Bell engineers of the V-280 Valor, a tiltrotor aircraft now submitted as an offering in the U.S. Army’s Future Long-Range Assault Aircraft competition, sought to anticipate and align with the U.S. Army’s vision for the long-term reliability and sustainability of its platform. Bell’s strategy seeks to use the Modular Open Systems Architecture (MOSA) to ensure long-term upgradeability and sustainability through the use of common technical standards, internet protocols, and specific interfaces intended to improve interoperability.

MOSA is an extremely critical key because the aircraft has for years been designed to operate well into the 2030s and beyond, in part by introducing paradigm-changing speed, range, agility, weapons, sensors, and computing. All of these components of next-generation technologies need to not only achieve breakthrough performance parameters, such as the ability to fly faster and farther than a Black Hawk helicopter without refueling but also to be sustained and upgraded decades into the future.

More specifically, survivability and sustainability enhancements will be critical as adversaries acquire more range, precision, jamming capabilities, and cyber war technologies. MOSA is specifically intended to keep pace with these emerging concerns, if not stay entirely in front of them to enable long-term safety for the aircraft and its crew.

“MOSA gets after those things that were most frequently changing and being able to upgrade at what I call the speed of relevance. If the enemy figures out a new way to push something at you to take the aircraft down, you need to rapidly be able to counter that with survivability gear,” said ret. Maj. Gen. Jeffrey Schloesser, the executive vice president at Strategic Pursuits at Bell’s Advanced Vertical Lift Center. During his thirty-four-year military career, Schlosser commanded the U.S. Army’s well-known 101st Airborne Division.

By using MOSA, Bell engineers can upgrade the V-280s electronics, computing, command and control, and Aircraft Survivability Equipment (ASE) to ensure reliability, performance, and an ability to counter advanced enemy surface-to-air missiles at what developers call the “speed of relevance,” meaning improvements to the platform will not be constrained by proprietary vendor technologies or the need to use “bolt-on” fixes requiring reconfigured hardware.

“Whether it's radio survivability gear, ASE (aircraft survivability equipment), as the Army calls it, you'll be able to rapidly move forward with a new design. And every time you do that, you're doing it in a competitive space, or not trying to bolt on a system to address a problem,” Schloesser said.

With MOSA, new hardware configurations don’t need to be built from scratch and integrated with an existing high-tech system. Common standards applications, with an emphasis on ensuring connectivity and transport layers, are “hardened,” which not only speeds up the time frame for crucial upgrades but also ensures sustained interoperability and sustained protections.

As a way of learning how to ensure long-term reliability for its V-280 Valor, a quality that vastly improves survivability by preventing in-flight malfunctions or some kind of mission failure in combat, Bell engineers completely deconstructed the aircraft. This approach helped Bell solidify its MOSA strategy.

“When we took apart the aircraft which is what we did starting in March, what we found was that the gearboxes were normal. There was not excessive wear and tear. In other words, our approach to building the gearboxes as well as all the other aircraft components were sound, we'd actually built the extra prop rotor gearboxes, extra blades, we never had to use any of those on that risk,”  Schloesser said.

The technological premise for building the aircraft, Bell developers say, pertains to a specific Modular Open Systems Architecture engineering approach. Essentially, this approach ensures common internet protocols, interfaces, and common data standards to enable rapid and low-risk integration of upgrades and sustainment enhancements. These often take the form of software upgrades or adjustments to electronics, mission systems, and command and control. The pace of modernization, particularly with computer processing, artificial intelligence (AI)-enabled systems, and sensors are so accelerated that Bell engineers made a concentrated effort to engineer the new V-280 with the technical infrastructure sufficient to ensure long-term upgradability and reliability. These are things that not only ensure successful modernization but also greatly improve the survivability of the aircraft as its systems become more reliable.

Bell developers have designed the V-280 for sustainability by drawing on their decades-long expertise in engineering tiltrotor aircraft such as the Osprey. However, the V-280 is an entirely “clean sheet’ design that has been airborne for several years, amassing 215 flight hours.

“Tiltrotor is a proven, fielded capability. Our next-generation tiltrotor builds upon 700,000 flight hours of experience and combat operations. We’re not experimenting with the unknown,” Schloesser added.

For example, Bell developers have increased the V-280’s reliability and sustainment potential by identifying and fixing or avoiding challenges or problems associated with the Osprey.