The MQ-9 Reaper Drone: America’s Weapon of Choice for the Next World War? 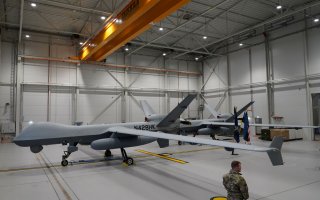 The Air Force continues to add weapons, sensors, electronics, and anti-jam technologies to its Reaper drone in order to operate the platform until 2035.

The strategy is to evolve and sustain the MQ-9 Reaper as it transitions from primarily a counterterrorism surveillance and strike platform into a great-power warfare asset. While less stealthy and therefore potentially less survivable against advanced major power air defenses, the Reaper drone still has tremendous utility and tactical value in a potential large-scale war. With this in mind, the Air Force has for many years now been evolving the Reaper to upgrade its technical systems and expand its mission scope to transition the drone into the great-power warfare era.

The efforts have been going on for several years as they include the addition of a universal weapons interface on the drone to add new weapons to its arsenal and increase its ability to transition between multiple types of bombs. The Air Force has also added new weapons to the drone, fuel tank extension and incorporated air-to-air weapons to the Reaper as part of an effort to expand the scope of its potential missions.

Most recently, the Air Force is retrofitting the Reaper with hardening technologies intended to stop enemy jamming attempts and improve resiliency and survivability. Other Reaper enhancements include EO/IR sensor upgrades as well as additional weapons integration.

The MQ-9 Program Office is already completing initial fleet retrofits that will mitigate potential jamming to the platform. This is the first retrofit of many, as MQ-9 M2DO configured aircraft will receive additional closely-held capabilities that will enable command and control mission assurance and resiliency while the aircraft is airborne, according to an Air Force report.

The Air Force has been adjusting and migrating the Reaper for a number of years now through a range of significant efforts to include the addition of the AIM-9X air-to-air missile. The AIM-9X, which also fires from F-35 jets and F-22 jets, can use advanced guidance technology including off-boresight targeting, meaning it can destroy non-linear targets behind or on the side of the aircraft that are not necessarily in a direct or straight ahead line of sight. Off-boresight targeting means that the missile can direct, turn or change course in flight. Last year the MQ-9 Reaper successfully destroyed a drone cruise missile target with the AIM-9X.

Software upgrades have enabled the Reaper to fly with as many as eight Hellfire missiles as well, adding to its overall weapons carrying capacity. The Reaper can now be armed with AGM-114 Hellfires, 500-pound laser-guided weapons called GBU-12 Paveway IIs, GBI-38 JDAMS, and a new international navigation systems guidance kit.