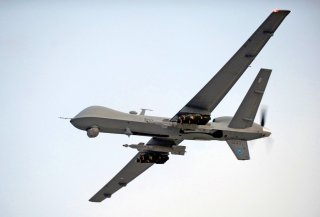 The highly lethal MQ-9 Reaper drone will live to surveil, attack, and fight into the future with both the U.S. Marine Corps and Air Force.

While funding for the Reaper has indeed been on the decline, advocates continue to argue that the platform remains viable and valuable. Noting its effectiveness in the War on Terror, they contend that the Reaper can go beyond firing precision hellfire missiles at terrorists to offer great operational capabilities in great power war contingencies.

This growing recognition, now shared by Marine Corps leaders, is one reason why the service plans to base MQ-9s in Hawaii and possibly other places throughout the Indo-Pacific. Commandant Gen. David H. Berger, for example, told the Senate Appropriations Subcommittee on Defense that the Corps plans to buy ten Reapers from the Air Force. Certainly, the Pentagon’s growing need for intelligence, surveillance, and reconnaissance (ISR) in the Indo-Pacific is not lost on the Corps, as the U.S. military services rapidly improve their ability to conduct multi-domain operations.

Support for the Reaper is also based on the clear concept that, despite the increasing threats U.S. warfighters face while operating in contested environments against near-peer competitors such as Russia and China, there is and will continue to be a need to conduct persistent day-to-day operations in less threatening environments. Yet it is also possible that adaptations to the Reaper might enable the drone to have some success in contested environments, perhaps by flying at higher altitudes and greater stand-off ranges or firing longer-range weapons. Berger also said different flight trajectories or envelopes require certain capabilities to “penetrate air space,” as he put it.

Berger said the Corps plans to double or even triple the amount of ISR it uses in the Indo-Pacific.

The Reaper has received significant upgrades since its inception, including newer high-fidelity cameras able to zoom into high-value targets from higher altitudes and a vastly increased weapons arsenal capability. Senior Air Force leaders previously spoke about the integration of a “universal interface” technology for the Reaper which uses common technical standards and software upgrades to enable the platform to fire a much greater envelope of weapons.

Modern Reapers can now fire the AIM-9X Sidewinder air-to-air missile as well as the AGM-114 Hellfire air-to-surface missile; 500-pound laser-guided GBU-12 Paveway II; and even GPS-guided, air-dropped bombs such as the GBU-38 Joint Direct Attack Munition. This clearly expands its mission envelope and the kinds of warfare scenarios in which it might be effective. Perhaps the Reaper, now armed with AIM-9X, could prove effective in some kinds of air-to-air engagements?

These things considered, however, the Air Force seems quite accurate in placing a high priority on smaller, stealthier, and well-networked ISR technologies to ensure crucial missions can continue in extremely high-threat, contested environments.