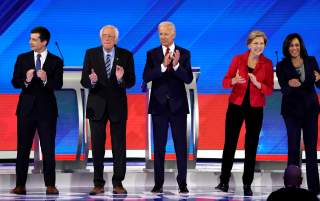 The top candidates vying to be the Democratic presidential nominee in 2020 will soon take the stage in Atlanta for their fifth televised debate.

With 10 people and only two hours to discuss dozens of complicated issues, viewers may have a hard time keeping up as candidates wade into the weeds of their pet policy proposals.

Fortunately, our scholars – who have written dozens of articles on the key issues of the 2020 Democratic primary campaign, as well as quite a few obscure ones – have you covered.

Here are three economic issues almost certain to come up in the Nov. 20 debate, along with a story from our archive that provides some context to help you evaluate what the candidates say.

Voters say health care is the top issue heading into 2020 – especially among Democrats. So it’s hardly a surprise that the topic has dominated the last four debates and will almost certainly be a hot topic tonight.

Several of the Democratic candidates, such as Senators Elizabeth Warren and Bernie Sanders, are proposing wholesale changes to the U.S. system of health care. How to pay for “Medicare for All” – without raising taxes on the middle class – has been a sticking point for the more ambitious plans.

Gerald Friedman, an economist at University of Massachusetts Amherst, has crunched the numbers on several different versions of a single-payer health care system and estimates a full-scale plan could cost as much as US$40 trillion over a decade.

But there’s an easier and cheaper way to get to Medicare for all, he argues: Simply expand the existing Medicare program to everyone.

Medicare’s “limited scope, skimpy benefits and cost-sharing keep costs low,” he writes, yet “it provides meaningful protection against the potentially crippling cost of accident or illness.”

The Economics of Dreamers

Immigration is another issue of importance to Democratic voters and one that’s been frequently on the lips of their candidates. Debate moderators from The Washington Post and MSNBC are likely to bring up a recent Supreme Court hearing involving an Obama-era program.

The court heard arguments over whether Trump can end the Deferred Action for Childhood Arrivals, or DACA, program. DACA allowed hundreds of thousands of young adults who were brought to the U.S. as children but lacked legal status – often referred to as Dreamers – to work and study without fear of deportation.

The hearing focused on whether the president has the right to terminate the program. CUNY sociology professor Amy Hsin, however, believes it’s important to assess the economic impact of Dreamers, who, according to her analysis, promote growth and lift wages.

“Overall, we estimate that the increases in productivity under the DREAM Act would raise the United States GDP by $15.2 billion and significantly increase tax revenue,” writes Hsin, who’s also an economist.

U.S. trade policy has been an important economic topic ever since Trump launched his trade war against China nearly two years ago. It’s also among the top concerns on voters’ minds.

Yet, compared with health care and immigration, it hasn’t actually come up much in the Democratic debates. With “phase one” of a trade deal with China reportedly close – and the costs borne by American companies and consumers rising – that may change tonight.

As Iowa State University scholars Wendong Zhang, Lulu Rodriguez and Shuyang Qu explain, farmers in particular have suffered as a result of the trade war. At the same time, Democratic candidates gearing up for the Iowa caucuses – the first nominating contest in the primary election season, held in February – have struggled to win the support of farm country.

So Zhang, Rodriguez and Qu surveyed corn and soybean farmers in the Midwest to learn why. They found that despite the mounting costs of Chinese tariffs, farmers still back the president.

As an Illinois farmer told them, “The Chinese do not play by the rules… They cancel shipment orders that are not in their favor. They continue to steal our patents. Only President Trump has tried to stop these unfair trade practices.”