Multi-Domain Connectivity: How the Navy Plans to Integrate Its Systems 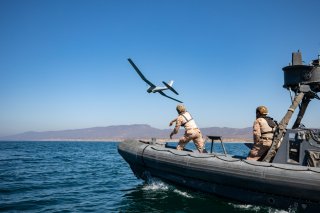 A drone sees an enemy submarine surface miles from a carrier strike group and instantly transmits targeting data to a ship-based command and control system, giving commanders an immediate strike window through which to attack the submarine. How can all of these seemingly separate entities—a drone, a fighter jet, and a ship-based command and control system—coordinate targeting data and attack fast enough to succeed in destroying the threat? This kind of scenario is exactly what the Navy’s current technologically-driven modernization strategy is seeking to enable. The Navy’s modernization strategy is intended to build multi-domain connectivity across the air, the surface of the water, undersea, and even land.

In order to engineer this seamless, cross-force networking, the Navy is attempting to develop a common set of technical standards. The Navy wants to architect its entire fleet and suite of emerging technologies and platforms with a common hardware and software configuration to enable sustained modernization and multi-domain networking for decades into the future.

The premise is rooted in “open architecture,” a concept that refers to a common system of internet protocols, gateways, and data transfer standards that, among many things, creates interfaces between otherwise disparate platforms and systems. Operating within a common technical infrastructure, unmanned systems, fighter jets, and surface ships could, for instance, modernize with compatible data protocols, making information sharing more fluid and immediate.

This development approach, outlined at the Navy League’s Sea-Air-Space Exposition by Ryan Moore, deputy major program manager for integrated weapons systems, is intended to ensure a progressive modernization trajectory aimed at upgrading and aligning software and hardware development. Moore described this in terms of a transition.

“We're trying to do common hardware and software on the respective platforms. And then by leveraging commonality, it'll allow us to rapidly address any issues that come up because there'll be common systems. This will also allow us to build capabilities that can be developed, integrated, and tested. So, capability unravels the multiple platforms at a given time,” Moore said.

“So as opposed to taking multiple years to develop, integrate, [and] test, we're going to develop a little test and learn a lot. It's kind of the ‘build-test-build’ approach,” Moore said.