Multi-Domain Operations: A 'Next Step' in U.S. Military Combat Strategy 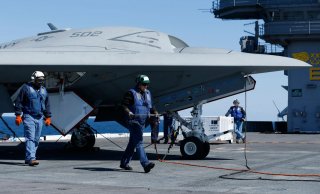 “Our new concept is MDO, for Multi-Domain Operations, intended as a next step in combat strategy to include new domains such as space and EW,” General Joseph Martin, Vice Chief of Staff of the Army, said at an event at a think tank called the “Foundation for Defense of Democracies.”

The concept, now in development for the last several years, is fast making technological advances to surge well beyond what may have been previously envisioned. Martin explained MDO as a new version of the well-known Cold War-era AirLand battle concept which sought to counter the former Soviet Union through integrated air and ground combat on the European continent.

MDO, Martin explained, is far more nuanced and complex, containing a host of overlapping variables such as cyber-hardening, the Army’s tactical network, air-sea integration and joint space connectivity, among other things.

“We seek the ability to enable any sensor and any shooter to have the right data in near real-time, to generate mass combat power across domains,” Martin said.

The concept here is to enable multi-domain combat maneuver in which armored vehicles, stealth bombers, surface ships and even submarines are no longer merely weapons platforms but “nodes” in a broader warfare network. Information itself and, as Martin put it, the ability to get target information from any sensor to any attacker and decrease latency, form the conceptual and technological foundation for modern warfare.

“Now we are playing catch up,” Martin said, explaining the great-power oriented modernization was impacted by years of U.S. wars in Iraq and Afghanistan.

“While we were busy doing what we were doing, our principle adversaries were busy studying our way of war. They looked at ways to defeat our joint fires. They have created capabilities that we call A2/AD, for Anti-Access-Area Denial, designed to prevent us from having joint fires and maneuver,” Martin said.

Martin called China the number one threat, with Russia close behind. Referring to the many combat successes of the 1980s “Big Five” platforms, Martin highlighted a few areas of the Army’s massive modernization campaign.

The Army sees now as the time to move into a new generation of big five warfare platforms, beyond the Abrams tank, Apache, Bradley, Black Hawk and Patriot, and embrace what Martin referred to as thirty-five new priority weapons programs. These new platforms include Long Range Precision Fires, Drones, the Next-Generation Combat Vehicle, Future Vertical Lift and the emerging combat Network.

Ultimately, Martin pointed to a well-known paradox characterizing rapid military modernization, namely that having a massive, high-tech, multi-domain lethal military force can stop war before it happens, and keep the peace.

“We have developed Multi-Domain Ops concepts. We determined gaps, which we understand much better now. This is not just about crisis and conflict but competition before conflict where you can deter the adversaries,” he said.