Musicians Get Some Aid from Spotify (And from Congress) 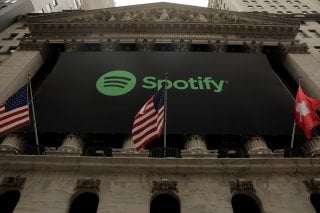 As coronavirus and its related quarantines continue to shut down much of the U.S. economy, among those who are really having a hard time are musicians, and others employed in the music industry. Most music venues are closed, as are recording studios, which have caused income to dry up for many who make their living making music. Many musicians have been holding living room concerts and streaming or posting them on Facebook, but it doesn't appear many have been able to find a way to monetize such events.

Into the breach has stepped Spotify, the music streaming company. The Spotify COVID-19 Music Relief project, launched this week, is a partnership with a trio of organizations,  MusiCares, PRS Foundation, and Help Musicians. Spotify is both donating to those organizations, and will match donations made on the Music Relief Project page dollar-for-dollar, up to $10 million.

The project, Spotify says, "recommends verified organizations that offer financial relief to those in the music community most in need around the world."

In addition to the donations, Spotify announced that it is working on a feature that will allow artists listed on Spotify to directly fundraise from their fans. This feature will also allow artists to "drive listeners to a fundraising destination of their choice." The feature will be optional, the company said.

This is similar to a program launched earlier this week by Yelp, to allow patrons of restaurants and other businesses to donate directly through that platform.

In addition, struggling musicians may soon have another source of help- the federal government. According to Rolling Stone, the coronavirus relief package that passed the U.S. Senate Wednesday night contains provisions that will make musicians and other Americans associated with the music industry eligible for relief.

The bill, which passed the Senate unanimously and is headed to the House Thursday, makes musicians, songwriters and "music support crew" eligible for relief grants and loans, provided they earn less than $100,000 per year. Music advocacy groups, including the Songwriters of North America (SONA), the Nashville Songwriters Association International (NSAI), and the National Music Publishers’ Association (NMPA), had pushed for the inclusion of the language, which was ultimately included in the final legislation.