Muslim Leaders are Complicit in the Global Rise of Islamophobia 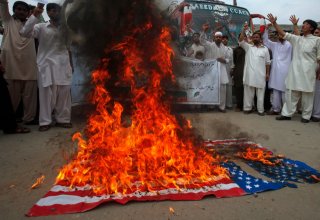 Abominable hate crimes against Muslim communities and immigrants in the high-income, civilized Western countries at best end up making headlines and drawing sympathies and offers of support—never mind that they are barely properly investigated by the law enforcement agencies and entail no consequences for the instigators, against the legal procedures of these very states.

But these forms of abuse are emerging as the new normal in the relationship between nations often viewed as utopias by a sizeable population in the Middle East and North Africa, and the diasporas that flee bigotry and persecution at home only to be cuddled by novel representations of prejudice and intolerance in places they regard as their shelters.

And they are not only the Muslim immigrants who are on the receiving end of racist hate in Europe and North America, frequently told to go back to their countries, embarrassed for their language pitfalls and communication handicaps. Native Muslims from these countries are also bedeviled by the rising tide of anti-Muslim animus. They are sometimes stopped and frisked by their vigilante-minded fellow citizens because they dress or pray differently or because sometimes people are seeking to vent their anger, needing vulnerable, submissive targets spotted at a shopping center, a bistro, or somewhere on the high street.

The normalization of Islamophobia is, of course, deplorable. But, sadly, as implied by some scholars such as Nazia Kazi, it is also inevitable against the backdrop of modern political developments and influential leaders’ divisive rhetoric making it expedient to indict Muslims worldwide for whatever challenges Western societies face.

Intolerance begets fanatism and, however effective our education systems prove to be in preaching against the obnoxity of racism, it seems as if this social cruelty is destined to be hardwired in the mentality of many of us.

In the global south, leaders often blame their shortcomings on foreign intervention, unequal access to resources, economic warfare, climate change, and Cold War-era concepts such as “imperialism.” In the West, however, the personae non gratae are usually the immigrants and religious minorities. When the vilification of immigrants and Muslims is proselytized by populist leaders so vociferously, it is intrinsic that aversion to them is absorbed and internalized by the masses.

Take the spike of anti-Muslim hate crimes in the aftermath of the European Union referendum in Britain: it was as if the Britons had rubber-stamped a nationwide crackdown on immigrants and Muslims with their vote to decouple the kingdom from the European Union. Racially and religiously motivated hate crimes in Britain increased by a staggering 118 percent between 2011 and 2018.

Only in 2015, the monitoring and advocacy group Tell MAMA documented a 326-percent surge in incidents of abuse targeting Muslims. The Conservative Party chieftains, nonetheless, continue tiptoeing around conceding to their Islamophobia problem; even the adoption of an official government-sanctioned definition of Islamophobia remains elusive.

Or take the United States, where the ascendancy of Donald Trump to power was a prelude to the outpouring of Islamophobic grudges nationally. The sharp-tongued president would kick off a spate of anti-Muslim malice with a caustic tweet now and then, at times triggering actual violence and terrorization of Muslims on the streets.

Trump’s fear-mongering against Muslims, his vitriolic language, and his constitutionally deranged Muslim Ban executive order have been documented to have turbocharged Islamophobic hate crimes markedly. In 2019, for example, personal attacks motivated by bias and prejudice peaked at a sixteen-year high in the United States, and a total of 7,103 hate crimes were chronicled by the Federal Bureau of Investigation, of which 219 offenses were Islamophobic—a notable increase compared to the preceding years.

Yet, it is not possible to capture the overall view of the global upswing of Islamophobia by inculpating demagogic Western leaders and partisan politics as being solely liable for the widening social gaps that are driving a wedge between the Muslim communities and non-Muslim majorities and perpetuating Muslim-bashing discourses and attitudes.

The leaders of Muslim countries are part of the process of codifying Islamophobia into the conscience of the Western public, and they are abjectly oblivious to the destructive role they are playing.

Nullifying their own avowals that they are the guardians of Islam and have a moral responsibility to safeguard a revered Abrahamic faith, the spiritual and political leaders of Muslim nations have projected a global image of Islam that is not harmonious with the values the international community has come to enshrine—such as democracy, freedom, equality, and diversity—even though Islam may not, in essence, be at odds with these principles.

In Saudi Arabia and Bahrain, medieval punishments are frequently meted out on delinquents and juvenile offenders, and apostasy, drug trafficking, and adultery are penalized by harsh sentences, including the death penalty. When such acts of state vengeance are rationalized as the enforcement of Sharia laws, it shouldn’t be expected that the global public accepts the entreaty that Islam is a religion of compassion.

In Pakistan and Afghanistan, angry protesters readily take to the streets to condemn cartoons blaspheming the Prophet Muhammad published by a European magazine, with their rallies brimming with anti-Western indignation and unpleasant scenes of picketers setting U.S., British, and French flags ablaze.

Such spectacles have never helped with imparting a positive impression of Muslims, particularly when Western commentators and pundits bluntly chide them as illuminations of backwardness and irrationality. Unluckily, the Muslim politicians who should introduce moratoriums on such practices fallaciously judge them as evidence of piety and resistance.

In Iran, more than four decades of peddling anti-American hostility and reading the riot act to not only the United States but the West as a whole—together with the pursuit of destabilizing policies across the Middle East, prying into the affairs of Arab nations, and insisting that “political Islam” demands such adventurous involvements—have certainly done a disservice to Islam.

Iran is the first country in the world to have embedded the word Islam in its official name: it’s an “Islamic Republic,” and its leaders have long harbored an ambition to export the Islamic revolution and Islamic axioms to the outside world.

But have they really achieved that, when at home they stifle dissent, crackdown on social media, impose their preferred lifestyle on a young population, divest civil liberties from the society, forcefully implement compulsory hijab rules, insist that isolation from the outside world is the silver bullet that can remedy the nation’s economic woes, and push for the ideological indoctrination of the children and students?

Of course not. The sort of statecraft Iran is subscribing to, and making a pretense of representing Islam in all facets of this flawed governance, is a betrayal of a religion nearly 1.8 billion people who practice peacefully across the world. This includes millions of Iranians who are devout Muslims but do not wish to see their religion tainted with the insincerities of politics and foreign relations.

When images trickling out of the Muslim world continue to reproduce tropes that the global public despises, whether it’s violent mobs chanting “Death to America” and burning flags, Iran marshaling militias in Iraq and Yemen and breeding insecurity in these geographies, or major Muslim world powers failing to initiate the most rudimentary dialogue among each other to settle their differences, it goes without saying that perceptions of Islam as a faith will be gloom-ridden and cynical.

The fact is that, rather than criticizing the Western societies for failing to tackle their racism problem, they are the elders of the Muslim world who should have an honest debate among themselves on how they have fanned the flames of Islamophobia.

For the minority communities of Muslims in Europe and North America, coming to grips with discrimination, bias, and maltreatment because of their background is a tormenting daily experiment. They simply aspire to peaceful lives, dignity, and equal rights, and wish to be integrated into the social fabric of their societies—the myth that Muslims in the West are resistant to integration has long been debunked.

That said, Muslim communities are wounded by the double whammy of the traction of far-right leaders, white supremacy, and ingrained racism in the West, and the miscarriage of leaders of the Islamic world whose rhetoric and policies have cast an entire religion and its followers in the most unfavorable light.

When a Muslim woman is assaulted because of her hijab or when a young Muslim student is bullied on campus because he has been seen praying in the mosque, the leaders of the Muslim world should feel guilty. Such mishaps are occurring hundreds of times a year worldwide, and their chronic mal effect on the psyche and wellbeing of individual Muslims and Islamic communities is a disgrace for those politicians who brag about being the custodians of the religion but are actually bringing it into disrepute.

Kourosh Ziabari is an award-winning Iranian journalist and reporter. He is a correspondent with Asia Times and a contributor to Fair Observer. He is the recipient of a Chevening Award from the Foreign, Commonwealth, and Development Office. He is also an American Middle Eastern Network for Dialogue at Stanford (AMENDS) Fellow and the East-West Center's Senior Journalists Seminar fellow. Kourosh’s writings have appeared on The Huffington Post, openDemocracy, Al-Monitor, Middle East Eye, Responsible Statecraft, Al-Arabiya, International Policy Digest, and BBC Persian. He tweets at @KZiabari.