My Pillow Is Going to War Against the Coronavirus (Making 50,000 Face Masks a Day) 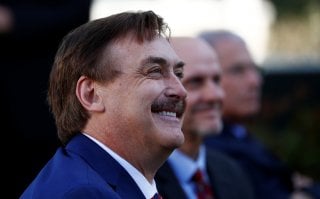 Yesterday, during his almost daily press briefing on the ongoing coronavirus pandemic, President Donald Trump welcomed to the stage multiple CEOs and company executives who would be utilizing their capital structure to manufacture in-demand medical products to support the government’s health efforts.

Last week the president invoked the Defense Production Act of 1950 which gives him the power to direct private firms to suit national needs in a time of crisis. But beyond demanding that General Motors switch from car production to making ventilators, Trump has been hesitant to use the state to pressure business. Yesterday’s inclusion of business leaders was intended to demonstrate the president’s ability to get companies to help voluntarily.

“We stand ready to help in any way we can. We don’t need the Defense Production Act to ask us to act,” said Greg Hayes, CEO of United Technologies.

The star of the show, however, was Mike Lindell, founder, and CEO of My Pillow Inc. Lindell’s effusive praise of President Trump, and his invocation of Christianity, disproportionately drew news headlines.

While the Rose Garden press briefing may have been many Americans' first introduction to Mike Lindell, he is a familiar face to conservative activists. Now a regular speaker at the annual Conservative Political Action Conference (CPAC), Lindell often utilizes his public speeches to retell his personal struggle. After alcoholism and an addiction to crack cocaine led to his divorce, Lindell underwent a religious awakening which led to his becoming sober in 2009. Since then, his company My Pillow has grown to have annual revenue of $300 million.

“Boy do you sell those pillows!” the President said, introducing Lindell. My Pillow has sold over forty-one million products, mostly through the use of late-night infomercials.

“My Pillow has designated some of its call center to help U.S. companies navigate the many issues that resulted from this pandemic. We’ve dedicated 75% of my manufacturing to produce cotton face masks,” Lindell explained. “In three days, I was up to 3,000 a day, by Friday I want to be up to 50,000 a day. I’m proud to manufacture our products in the United States, and I’m even more proud to be able to serve our nation in this great time of need. Thank you, Mr. President, for your call to action, which has empowered companies like My Pillow to help our nation win this invisible war.”

Then, in “off the cuff” remarks, Lindell added, “God gave us grace on November 8, 2016 to change the course we were on.” He lamented the removal of prayer from the public-school system and the general secularization of society. “I encourage you, use this time at home to get back in the Word, read our bibles, and spend time with our families.” Lindell concluded by saying that with daily prayer the country will make it through the public health crisis.

Beyond merely being a fan, Lindell has donated $200,000 to Trump’s campaigns and various PACs and serves as the 2020 reelection campaign’s state chair in Minnesota. Campaign advisors, and possibly even the president, have encouraged Lindell to consider a gubernatorial bid in 2022, utilizing his personal rags-to-riches parable as an engine for electoral politics.