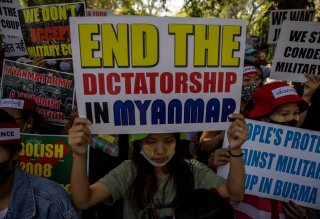 Since the arrests of elected officials, including State Counsellor Aung San Suu Kyi on February 1, Myanmar has yet again descended into a state of uncertainty. In the span of twenty-four hours, the military declared a one-year state of emergency; formed a new government; and transferred legislative, executive, and judicial powers to the military’s commander-in-chief, Senior General Min Aung Hlaing. The democratic transition of the past ten years has dramatically halted. In the subsequent days, hundreds of thousands of civilians have voiced their anger through protests, strikes, and campaigns on Facebook, which the military cut off in early February along with Twitter and WhatsApp.

In response, the United States and its allies have condemned the coup and urged the release of detained officials. President Joe Biden announced sanctions on key military individuals and entities earlier this week. On the other hand, China has employed soft language calling the coup a “cabinet reshuffle.” Secretary Antony Blinken, in a tense call with Yang Jiechi, China’s top foreign policy official, urged China to condemn the coup in Myanmar. Lecturing China is neither enough nor the right approach. Instead, the United States needs to reenter dialogue with China to find ways to mediate with the Myanmar military. In a rare occurrence, the underlying factors indicate that Beijing and Washington should find their interests aligned in support of the National League for Democracy (NLD).

Contrary to popular belief, China’s patterns of engagement with Myanmar over the past decade has proved that China has not always sided with the military. After the National League for Democracy, the party of Aung San Suu Kyi came to power in 2015, China has spent a considerable amount of effort in building a good relationship with the NLD government and Aung San Suu Kyi, primarily in fear that Myanmar would align with the West. Most recently, after last year’s November election in which the NLD won by a landslide, Foreign Minister Wang Yi visited Myanmar expressing strong support for the NLD and a commitment to work with the NLD government for the second term. In response to China’s courtship, the NLD has been careful in balancing its relationship between its giant neighbor and the West.

China’s interest in Myanmar is primarily strategic and economic. In the past decade, China has worked hard to finalize deals on a China-Myanmar Economic Corridor, a multi-billion-dollar infrastructure initiative. The Corridor covers cooperation on hydroelectric dams, deep-sea ports and a railway connecting China’s southwestern Yunnan province to both Yangon, the commercial center of the country, and the Indian Ocean.  Myanmar is a strategic region for China to gain access to the Indian Ocean, thereby advancing its strategy to diversify domestic energy supply lines by bypassing the Strait of Malacca.

The NLD government has successfully negotiated multiple projects with China, most conspicuously during President Xi Jinping’s historic visit to Myanmar in January 2020. The parties signed thirty-three memorandums of understanding (MOU) and finalized the agreement for the development of the Kyaukphyu deep-sea port, the flagship project of the China-Myanmar Economic Corridor.

The realization of these megaprojects is jeopardized with the military’s recapture of power, as this coup will pull Myanmar deeper into a period of political instability. In addition to overwhelming popular support for the NLD as evidenced by the ongoing protests, ethnic armed groups in Myanmar have also voiced their discontent for the coup. Most notably, General Yawd Serk of the Restoration Council of Shan State (RCSS), who is also the acting chairman of a group representing ten groups in the National Ceasefire Agreement (NCA), condemned the coup and stated that the trust in the military has been lost.

Myanmar is a state plagued by civil conflict and the signatures on the NCA were the results of hard work in the past ten years. Under a semi-democracy, ethnic groups have also enjoyed participating in political processes. A return to military dictatorship does not sit well with the ethnic groups. If the National Ceasefire Agreement falls apart, Myanmar will enter into another deep state of civil conflict. China’s economic ambitions will be threatened. Thus, a return to democratic rule is necessary to secure a state of stability, which is integral to China’s strategic and economic ambitions.

Not only is the military’s ascension a threat to China’s strategic and economic goals, but the military will also become a diplomatic liability for Beijing. With China’s strategic and economic goals compromised, supporting the military on international fora will arguably become a cost with no benefit. On February 4, China tellingly joined the fifteen members of UNSC in releasing a statement expressing “deep concern” about the situation and calling for the release of detainees.

The rising Sinophobia in the country is another threat to China’s future relationship with Myanmar under military rule. Large crowds have gathered in the last weeks in front of the Chinese embassy in Yangon, protesting against the alleged Chinese support of the coup. Conspiracy theories are also floating around about China providing technical assistance to the military in setting up firewalls to control the internet. Under the NLD, Aung San Suu Kyi has managed anti-China sentiments as she promoted the powerful neighbor as an important ally for economic development.

For the United States, the release of Aung San Suu Kyi and the restoration of democracy is significant from both a strategic and human rights perspective. Yet Washington must come to grips with the fact that the United States and its allies have limited leverage over the Myanmar military. The Biden administration has stated that Washington is “ready to work with China when it is in America’s interest to do so.” Myanmar can provide a rare opportunity to work with China on a common issue. Negotiation with the military to release elected officials and restore the workings of democratic institutions should be the next steps. China will be the necessary partner to restore democracy in Myanmar and the underlying factors indicate a window of opportunity for Beijing and Washington.

Shine Aung is a senior at the Georgetown University School of Foreign Service studying International Politics with a concentration in Foreign Policy. He is from Myanmar and has conducted research on China-Myanmar relations, U.S.-Myanmar relations, and Myanmar’s domestic politics.​

Myanmar Coup: How the Military Has Stayed Power for Decades