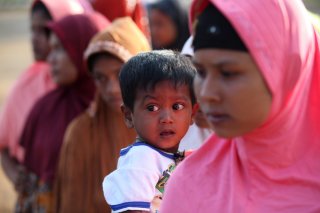 Myanmar has been ordered by the International Court of Justice to take “provisional measures” to protect the Rohingya, an ethnic Muslim minority in the Buddhist-majority country that has suffered “mass killing, mass displacement, mass fear [and] overwhelming…brutality” at the hands of the military.

Over 700,000 Rohingya fled or were forced out of the country since 2016, most to neighboring Bangladesh.

The order comes after the African state of The Gambia in November 2019 filed a complaint of genocide of the Rohingya against Myanmar with the International Court of Justice, the judicial organ of the United Nations. Under the 1948 Genocide Convention, genocide requires a specific intent to destroy a group in whole or in part.

The U.N. General Assembly and numerous human rights organizations have for years condemned Myanmar’s attacks on the Rohingya. The country – which was slowly emerging from the global economic and political isolation that followed its 1989 military coup by making some very modest concessions to democracy – has also been subjected to new sanctions.

But this is the first judicial intervention in the crisis. Can international law protect the Rohingya when diplomacy, politics and sanctions have failed?

Unlike domestic courts – whose judgments can be enforced by sheriffs, seizures of property, fines and even imprisonment – international courts have no police forces at their disposal.

The International Court of Justice can call on the U.N. Security Council, which is responsible for responding to threats to and breaches of international peace, to enforce its orders. However, Security Council action can be vetoed by any one of its five permanent members, which includes Myanmar’s ally, China.

As a law professor who has taught international law and human rights for more than 30 years, I know not to overestimate the effectiveness of an international legal system established in the 17th century and that is founded on the sovereign independence of states.

The reach of international law is limited. It has been more successful in resolving boundary and trade disputes than in ameliorating violent conflicts within or between states. It is often better at delivering remedies to victims of human rights violations than in changing dictatorships into democracies.

However, I do agree with late Columbia Law School professor Louis Henkin, who observed more than 40 years ago, “Almost all nations observe almost all principles of international law and almost all of their obligations almost all the time.”

The court’s four orders to Myanmar were very limited in scope, which may increase the likelihood of compliance.

The first two measures ordered simply call on Myanmar not to violate its obligations under the Genocide Convention. In other words, it must neither commit genocide nor allow genocide to be committed within its territory.

In December, she argued before the court that The Gambia’s allegations were “incomplete and misleading.” She said they “ignored the conflict between armed groups and the Myanmar military in Rakhine State,” where most Rohingya live.

Suu Kyi did concede that the military might have used “disproportionate force,” potentially “in disregard of international humanitarian law.”

The most recent U.N. report on the Rohingya situation concluded that “there is a serious risk that genocidal actions may occur or recur.” However, it also observed that the situation is not as grave as it was during 2016 and 2017.

Myanmar’s representatives told the International Court of Justice in December that it is engaged in “reparation initiatives to facilitate the return of Rohingya refugees” and will “promote ethnic reconciliation, peace and stability.” They also said the government “intends to make its military accountable.”

The judges found these measures insufficient to protect the Rohingya. But Myanmar may nonetheless argue if and when it reports back to the court that such steps essentially meet its Genocide Convention obligations.

The court’s third order, to take “effective measures” to preserve all evidence related to the alleged genocide, is more complicated.

If obeyed, it could incriminate Myanmar – though even evidence that mass atrocities occurred in Rakhine state does not necessarily prove “genocide.”

The court also ordered that Myanmar update it by May on the measures that it has taken to comply with the court’s orders. The country can technically fulfill this requirement even if those measures are ineffective on the ground.

Not a victory, but not a failure

An analysis of provisional measures ordered by the International Court of Justice between 1951 and 2002 found that in only one case out of 11 did a state comply fully with such measures. These are orders like those handed down to Myanmar.

But openly ignoring international legal norms can carry a cost.

Publicly refusing to comply with the international court’s orders will only increase global condemnation and slow the economic development Myanmar seeks.

Perhaps the most that the International Court of Justice may achieve with its order to protect the Rogihnya will be to ameliorate the situation of the 600,000 Rohingya still inside the country. It could also make the future less dangerous for refugees who decide to return.

Even if that’s all that this judicial intervention accomplishes, it may still beat the alternatives.

Pressure from foreign governments, bad publicity and economic sanctions did not stop the atrocities that were undoubtedly being committed in Myanmar for years before this court case. And armed intervention – often launched under the pretext of the “responsibility to protect” – has been a disaster in situations from Afghanistan and Iraq to Yemen.

Perhaps, to echo what Winston Churchill said about democracy, law is the worst form of international justice, except for all the others.