The Nagorno-Karabakh Conflict Is Destroying Armenia 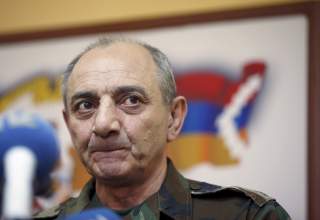 In other words, the right of self-determination was not initial appeal of Armenia, it was initially attempt of annexation of the part of territories of Azerbaijan (Miatsum). Later realizing that annexation might create problems for Armenia internationally, they opted for more attractive paradigm of self-determination for international audience and in order to avoid easy labeling as an occupant.

Unfortunately, Armenians are now trapped between two conflicting paradigms—both in international affairs and domestic legislature. And although Armenia has been consistently trying to present Nagorno-Karabakh as an independent entity, Armenian officials have often referred to the annexation decision when dealing with domestic affairs. So, before touting Nagorno-Karabakh as an independent party on par with Azerbaijan and Armenia, Armenia should officially amend all legislature to reflect that it no longer abides by the annexation decision. This may be the only way to put an end to all legal disputes.

Additionally, according to the Armenian Constitution, there is ten-year residence and citizenship requirement. Robert Kocharyan did not meet this requirement since he was not born in the Republic of Armenia and did not apply to become a citizen. During the 2003 presidential election campaigns in Armenia, the court declined the case of six opposition candidates who demanded that it nullify the passport of Robert Kocharyan since he was not a true resident. The opposition candidates also pointed out that both the Constitution of Armenia and Nagorno-Karabakh prohibit dual citizenship. They noted that Robert Kocharyan was legally considered an Azerbaijani citizen, and therefore he could not be a president of Armenia.

At any rate, all eyes and expectations are on Pashinyan. Will he save his nation and rescue the country from the edge of an imminent precipice? Or will he be a disappointment and allow the country to depopulate and die slowly. Obviously, time, as Ambassador Richard Mills noted, is not on the side of the Armenian statehood and people. Azerbaijan has restricted Armenia’s access to all regional energy and transit projects and infrastructures. Additionally, 83 percent of landlocked Armenia’s borders have remained closed for more than twenty years, which has had a devastating effect on the economic and demographic potential of Armenia. Azerbaijan will likely continue this policy until vested parties engage in substantive negotiations.

The one thing that must be made clear to everyone is that so long as there is no resolution about the fate of Nagorno-Karabakh, then there will not be any way for Armenia to be a fully democratic country or achieve any economic progress. Neither the best reform practices nor the greatest Armenian lobby would not be able to help the country. Thus, the Armenian government and Trump administration must push for substantive negotiations and an urgent resolution to the conflict. All parties involved should consider UN Security Council Resolutions as well as international law and territorial integrity issues in the broader region.

Fuad Chiragov is a researcher affiliated with a Baku based independent think tank Center for Analysis of International Relations.