NASA’s Planetary Protection Mission Took Off into the Sky 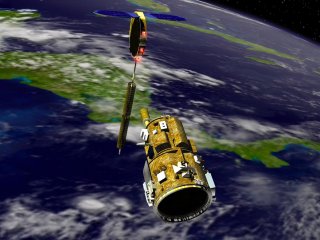 NASA’s Double Asteroid Redirection Test, also known as DART, took off from Earth into space as part of what will be the first-ever evaluation of protecting the planet from incoming asteroids. The DART test will ascertain whether a spacecraft can navigate to an asteroid target, collide with the space body, and alter the asteroid’s trajectory.

“DART is turning science fiction into science fact and is a testament to NASA’s proactivity and innovation for the benefit of all,” explained NASA Administrator Bill Nelson in NASA’s statement covering the launch. “In addition to all the ways NASA studies our universe and our home planet, we’re also working to protect that home, and this test will help prove out one viable way to protect our planet from a hazardous asteroid should one ever be discovered that is headed toward Earth.”

DART is targeting a small moonlet called Dimorphos, which is in orbit around a somewhat larger asteroid. Though NASA does not know Dimorphos’s shape exactly, it estimates the moonlet’s diameter at 160 meters, or about 530 feet. Though Dimorphos is not exactly colossal by interplanetary standards, a rock that size could cause untold damage on Earth.

Back on Earth, scientists and astronomers will hopefully be able to observe if the test was a success. Although the test is too far away for observation, NASA believes that it will be able to track Dimorphos’ altered orbit if the crash is successful.

Thus far, NASA has not observed or tracked an asteroid that could pose a threat to Earth, though “we continue to search for that sizable population we know is still to be found. Our goal is to find any possible impact, years to decades in advance, so it can be deflected with a capability like DART that is possible with the technology we currently have,” explained Lindley Johnson, planetary defense officer at NASA Headquarters.

“DART is one aspect of NASA’s work to prepare Earth should we ever be faced with an asteroid hazard. In tandem with this test, we are preparing the Near-Earth Object Surveyor Mission, a space-based infrared telescope scheduled for launch later this decade and designed to expedite our ability to discover and characterize the potentially hazardous asteroids and comets that come within 30 million miles of Earth’s orbit.”

NASA officials specify that this particular asteroid does not pose any threat to Earth whatsoever. Still, having the ability to detect and possibly redirect incoming asteroids could prove to be an invaluable investment in the future, should a threatening interstellar body eventually be detected.