NASA Wants to Knock an Asteroid Out of Orbit 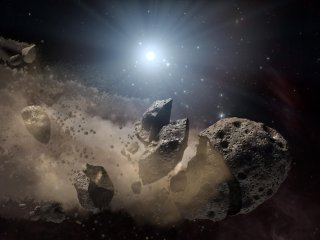 Although it sounds like something out of science fiction, the NASA mission will attempt to hit an asteroid and alter its orbit in an evaluation of planetary defense.

The Double Asteroid Redirection Test or DART, will send a kinetic impactor on course to hit what NASA calls a small moonlet named Dimorphos in orbit around another, larger asteroid. NASA estimates Dimorphos’s size at about 160 meters in diameter.

Using Earth-based telescopes, NASA scientists will observe the impact’s effect on Dimorphos and use the data they gather to improve computer modeling and asteroid orbit predictions, should an ever head dangerously close to our planet.

“DART will be the first demonstration of the “kinetic impactor” technique in which a spacecraft deliberately collides with a known asteroid at high speed to change the asteroid’s motion in space,” a NASA official involved in the organization’s planetary defense project explained.

“This technique is thought to be the most technologically mature approach for mitigating a potentially hazardous asteroid, and it will help planetary defense experts refine asteroid kinetic impactor computer models, giving insight into how we could deflect potentially dangerous near-Earth objects in the future.”

A video from Johns Hopkins University provides an overview of how exactly DART would travel through space, target the asteroid, and maneuver itself towards impact.

The DART spacecraft itself is not large, but it will hit Dimorphos at 6.6 kilometers per second, or nearly 15,000 miles per hour. Despite these blisteringly high speeds, Dimorphos’ orbit will change by on a fraction of one percent—but that’s enough to be observed here on Earth.

The DART test is scheduled for launch on November 23rd, with another launch the next day if the first initial launch is unsuccessful. If both launches are unsuccessful, NASA will reschedule through February of next year.

In 1908, a large meteor burst in remote Siberia, flattening eight hundred miles of forest and an estimated eighty million trees. Though no people are thought to have died, the 120-meter rock broke apart due to the intense pressure and heat it generated on its descent to Earth, releasing an estimated 185 Hiroshima bombs’ worth of energy.

NASA emphasized that neither Dimorphos nor its parent asteroid poses any threat to Earth. Furthermore, no asteroid of consequential size is currently predicted to hit Earth in the next hundred years, though not all asteroid-sized bodies are presently known. Still, it might just be a question of time—better safe than sorry.