Nation Building: Will the Taliban Succeed Where America Failed? 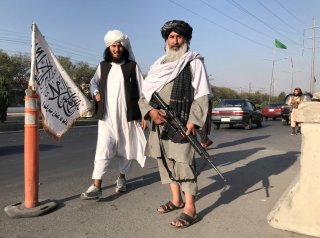 As the fall of Afghanistan to the Taliban is complete, it is time to ask how this spectacular turnaround of events came about. For twenty long years, the world was constantly fed with a regular dose of Western nation-building achievements in Afghanistan. To the proponents of nation-building, thanks to their intervention, Afghanistan had moved on. The votaries of this narrative never failed to remind us of the spectacular progress the Afghans had made with regard to embracing a democratic liberal order. Should there be a challenge to this new ethos, we were asked to believe, the “spirited and brave” Afghan police force and the National Army will steamroll any such opposition. Turns out, underneath this liberal tom tomming and proclamation, nothing really had changed on the ground in Afghanistan.

One cannot underestimate the crucial civilian support of the Taliban’s advances. Why did they do it? One could push forward two distinct arguments in this regard. First, given the notoriety of the Taliban, the masses perhaps gave in to save their skins—as a matter of simple survival strategy. Second, although it is controversial to posit, it is perhaps their deep conviction in the Taliban’s ideology and worldview which stopped the mainstream from opposing these fighters.

On the question of little or no grassroots resistance against the Taliban advances, the masses were never really converted to the grand claims of societal transformation brought in by the Western nation-building enterprise. The only first-hand experience they had was the emergence of a corrupt class of elites. The claim of trillions spent on rebuilding Afghanistan and the coalition forces having demolished the Taliban to an insignificant force was a lot of hot air.

Consequently, when the Kalashnikov-carrying Taliban motorcycle riders drove into their cities, its inhabitants simply stood and waved at them. Bewildered many amongst us are asking how the Afghans stood as silent spectators as the Taliban took over of their country. What could be behind the strange Afghan behavior vis-à-vis Taliban consolidation? It is, as if they, were welcoming the Talib—looking forward to their regressive regime. As per the soldiers abandoning posts and joining this outfit, let us not forget that many of these soldiers came from the Taliban’s ranks. Those soldiers who did not have any antecedent behind them were hand-in-glove with the Taliban. The powerful, albeit controversial view, that Afghans surrendered without a fight has to be seen in this perspective. When the leader of the country along with his top officials flees instead of defending the country, it demonstrates the level of commitment to the government that the masses had in the first place.

That a society and its culture are hostages to the prevailing ideology and regime disposition is a familiar argument. That may be so, but it could also be the fact that a great many of those living under that disposition may actually be fine with that specific arrangement. Could it be that despite the outsiders’ frustration, Afghans are genuinely keen to be ruled by the Taliban under the constitution of the Islamic Emirate of Afghanistan and Sharia law?

The Taliban argument that they had a government, and they were removed through external intervention although hilarious is nonetheless irrefutable. Plenty of Afghans, despite benefitting from the Western economic incentives, did not really favor the presence of outsiders or embrace their ideas. An Afghan is an astute observer. They have seen empires come and go and bite the dust in their effort to control the Afghans. From Alexander the Great to the Americans all have been humbled in their attempts to conquer this fierce country.

No wonder it is these very outsiders who labeled this political terrain the graveyard of empires.

Lest we forget, both the grassroots and the mainstream Afghans had no illusions about the temporality of the outsiders’ presence in their landscape. The ideas the outsider presented them were considered transient—not suitable for local tastes. Outwardly, they seemed to accept these ideas and values, as they had to keep up appearances, for the material rewards it brought in. It was playacting all along. The joke that the Taliban gave away Afghanistan to the United States and its allies, for twenty years on lease in order to benefit from a US$ 3 trillion investment in their country, while of bad taste nonetheless speaks volumes about the futility of external intervention in this unforgiving land.

Time to Move on

The manner in which both the Afghan forces and the common citizenry gave in to the Taliban advances proves the fact that perhaps the majority of the Afghans are fine with this outfit. Having said that the rest of the world has a problem with this kowtowing of the Afghans. Perhaps liberals would have liked a spirited, good fight by the Afghans against the forces that seek to reverse the liberal order. But that determination and resolve among Afghans, it is proved, is in short supply. Instead of standing up to these lightly armed radical bigots, the army deserted its post and the government fled the country en masse. It is in this context that President Joe Biden’s remark that "We gave them [the Afghans], every chance to determine their own future. We could not provide them the will to fight for that future," makes perfect sense.

At the end of the day, the world we live in is the world we create. We alone have the power to change it for the better or muck it up. Twenty years was a fairly good amount of time for the Afghans to embrace a new order. That they so spectacularly gave in to the Taliban is indicative of the strength of their commitment to the liberal order that the West offered. While tragic and gut-wrenching, the footages of Afghans thronging to Kabul Airport to leave the country demonstrate their weak resolve for their own country.  Perhaps it is time we sought out the views and opinions of rural and semi-urban Afghans living elsewhere in the country, untouched by the modernity and progress that the externally sponsored nation-building initiative had brought in.

Similarly, while characterizing the Taliban we talk as if they are Martians. They are not extra-terrestrial beings planted on Afghan soil. Unlike their earlier reincarnation who grew up as refugees in Pakistan, many of the current Taliban recruits are born and brought up in Afghanistan. They are very much the product of a specific Afghan worldview. We may find their presence offensive, but we cannot altogether dismiss them as outsiders.

In any rule book of nationalism, an indigenous group fighting to rid the country of foreign troops and external intervention would be defined as a nationalist force. As a nationalist force, if the Taliban decides to change the country’s flag, call it the Islamic Emirate of Afghanistan, and impose a new legal structure based on the core religious values of the society, it is their prerogative. If we are fine with Saudi Arabia following a less than democratic political culture and a Sharia-based legal order, we should not have any problem with the Taliban’s bigoted and misogynistic social practices.

In our eager liberal messianic resolve to see things our way, all over the world, we have forgotten that there may be people in places who do not share our concerns, beliefs, values, and our interpretation of good life. Just because we all live in an interconnected world, does not necessarily mean everyone should follow the same rules and principles. Are all Afghans desperate to leave the country? Has the entire citizenry emptied itself from its homes and become internally displaced or taken refuge outside its borders? It would appear, Taliban or no Taliban, that the bulk of the country’s inhabitants are going about their business as usual.

Perhaps it is time that we accepted the variances between communities and cultures and their ways of doing things. It could be that despite their conversion to the ideas and aspirations of the world outside, that the majority of Afghans are still bound to their pre-existing notions of honor and culture, right and wrong, and so on and so forth. Perhaps it is time we changed our way of thinking and not expect the other way around.