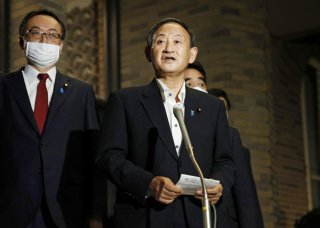 Japan is incrementally becoming more of a consequential international actor amidst an increasingly complex international security environment, and so Tokyo concomitantly faces a greater array of national security challenges requiring nimble and effective policymaking. Unfortunately for Prime Minister Yoshihide Suga, there will be no honeymoon period during which he can comfortably settle into his new job. There is no doubt that Suga is a highly effective policy coordinator, but he will need to draw upon the national security expertise of other senior officials in formulating and executing a national security agenda for Japan—irrespective of whether he proves to be a transitional figure, or a transformational one.

The highly capable incoming chief cabinet secretary, Katsunobu Kato, is familiar with national security and defense budget issues, for which he was responsible at one point as a finance ministry official. Additionally, the new defense minister, Nobuo Kishi, while not a high-profile strategic thinker presumably has a direct conduit to his brother, former Prime Minister Shinzo Abe. However, national security expert Taro Kono has been effectively sidelined, and Foreign Minister Toshimitsu Motegi is better known for negotiating trade agreements than for national security policy planning. This makes it all the more imperative for Suga’s administration to undertake a prudent reality check and possible rebalancing of its national security agenda now, rather than simply to assert that the Japanese government will continue the Abe administration’s policies nominally based on this year’s National Security Strategy, without any real reflection or forethought. Otherwise, Japan will revert to reflexively responding to international developments as they occur, rather than driving or influencing them.

In considering Japan’s national security agenda, overlaying more traditional security issues is of course the coronavirus pandemic, a transnational security threat that knows no borders and compels a new approach to international cooperation. In his pre-recorded speech to the UN General Assembly to be presented September 25, Suga will emphasize Japan’s participation in COVAX Facility, an international framework intended to “accelerate the development and manufacture of coronavirus vaccines, and to guarantee fair and equitable access for every country in the world.” The United States, China, and Russia have declined to participate, affording Japan the chance to exercise a greater leadership role, if Suga will take it. Suga will also discuss Japan’s providing Y100 billion ($956 million) FY2020 for medical equipment for countries whose medical systems are facing stress in contending with coronavirus, another opportunity for Japan to demonstrate international leadership.

Promotion of the Indo-Pacific strategy. Abe’s signature national security initiative, Japan has undertaken to strengthen a network of maritime states as a means of counterbalancing China’s increasingly assertive strategic posture. Abe’s personal initiative and leadership has been the driving force, most recently demonstrated by Japan signing an Acquisition and Cross-Servicing Agreement (ACSA) with India. While not particularly glamorous, an ACSA is an important building block of international security cooperation. To put things in perspective, Japan’s ACSA with the United States germinated in 1989 and only bloomed in 1996, despite the inherent logic of allowing treaty allies to supply fuel, parts and maintenance to each other’s forces as practicable. With India, this modest if significant step became a reality in no small measure owing to PM Abe’s ambitious pursuit of personal diplomacy with India’s Prime Minister Narendra Modi. It remains to be seen how effectively Suga will be able to continue Abe’s Indo-Pacific initiative, but this should be atop his national security agenda. Suga’s seeming lack of enthusiasm for revising Article 9 of Japan’s constitution, while more symbolic than substantive, may be a harbinger of his taking his foot off the gas pedal on the Indo-Pacific strategy as well.

Rebalancing the U.S.-Japan alliance and Japan’s force posture. Abe made great strides in “normalizing” Japan’s alliance relations with the United States, including through 2016 legislation allowing the Self Defense Force to assist U.S. forces under attack. His personal diplomacy with President Donald Trump helped Japan avoid the intensely conflictual negotiations Korea is experiencing over Host Nation Support for U.S. forces, a feat Suga may find difficult to replicate. Abe also managed U.S. basing issues effectively enough to minimize friction with the United States. Suga needs to continue this momentum, which means he needs to act rapidly to cultivate a close relationship with the winner of the U.S. presidential election. Otherwise, we may see a deterioration of close U.S.-Japan ties, much as when the Ron-Yasu relationship was supplanted by the ineffectual Ron-Noboru one.

Suga should effectively utilize the National Security Council system Abe implemented lest decision-making devolve into siloed fiefdoms. He also needs to pursue more strenuously the Japanese Government’s ability to manage and protect classified information if Japan ever hopes to join the “Five Eyes” intelligence-sharing collective. It may not be too late to revisit the precipitous cancellation of AEGIS Ashore or to pursue an effective alternative, and Suga should seize that opportunity. And given the growing threat from North Korean and Chinese missiles, he should not allow debate about a preemptive conventional missile strike capability to wither on the vine. All that notwithstanding, continuing the momentum of Abe’s efforts to rebalance the alliance and modernize Japan’s force posture may be a challenge for Suga, given his reputed closeness to coalition partner Komeito.

Engaging in strategic competition with China. As China and the United States continue their slide towards an overt Manichean struggle, Beijing will be increasingly motivated to warm up to Tokyo in an effort to soften allied resolve and avoid encirclement. It will be tempting for Suga to be responsive; China is Japan’s largest trading partner after all. Moreover, the faction-less Suga may be reliant on the continued support of LDP Secretary-General Toshihiro Nikai, long an advocate of closer Japan-China economic ties, who backed Suga for prime minister. China’s blandishments may include greater pandemic cooperation, amelioration of Chinese provocations around the Senkaku Islands, and of course putting a Xi Jinping visit to Tokyo back on track.

While it would be imprudent for Suga to rebuff China’s overtures, he should meanwhile remain firmly focused on close cooperation with Washington vis-à-vis challenges posed by China across the board, including the future of the digital economy and its impact on national security and society; abuse of facial recognition technology and social credit scores; international “social distancing” from China with regard to sensitive supply chains; Beijing’s influence campaigns and election interference; cyberattacks and IP theft; human rights abuses, including in Xinjiang and Hong Kong; and of course China’s military buildup and provocative military posturing in the South China Sea and Senkakus, inter alia.

Improving atmospherics with South Korea. Suga has taken a tough stance toward South Korea, but the change in administration can allow both sides an opportunity to lower the temperature in their relationship, even in the absence of any new substantive or innovative policies. Suga should attempt to bring the United States into the mix whenever practicable, to serve as a buffer and help smooth communication. He should also attempt to revivify lower-level consultations with Seoul. Suga might also intimate to President Moon Jae-in that greater support would be appreciated from Seoul on Japanese abductees in North Korea.

Putting North Korea and Russia negotiations on the back burner. Suga should face the fact that two of Abe’s least successful initiatives concerned efforts to retrieve either the Japanese abductees from North Korea or the Northern Territories from Russia. Abe’s offers to meet with North Korean leader Kim Jong-un fell on deaf ears, and his intensive diplomacy with Russian president Vladimir Putin has amounted to little beyond the alleviation of political or economic pressure Japan might have brought to bear. Japan established two-plus-two format security talks with Russia, normally reserved for close allies; and Japan was the only G7 country not to expel Russian intelligence officers following the attempted murder of Sergei Skripal in March 2018. In return for such moves, Tokyo received nothing but ephemeral goodwill, if that. Frankly, neither North Korea nor Russia has any incentive other than to dangle these incentives before PM Suga’s nose without actually offering up anything tangible. The new prime minister would do well to lower expectations and place negotiations with North Korea and Russia at the bottom of his national security agenda. He will have more than enough high-priority national security agenda items to keep him fully occupied.

Thomas Cynkin is a Director at the Bush School of Government and Public Service at its Washington DC teaching site. He is also a former Foreign Service Officer and was the Asian affairs advisor to two U.S. Ambassadors to the U.N. and two Deputy Secretaries of State.