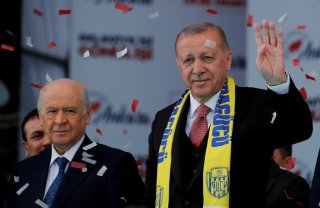 Few in the Erdogan administration predicted in 2011 that the government’s open-door policy concerning Syrian refugees could become a near-permanent crisis in Turkey. Since 2011, Turkey has kept its doors wide open for the Syrian refugees that were coming into the country by the millions. At the time, both the government and the society welcomed the refugees, believing that they would return back to Syria when the war ended.

However, it all turned out to be false. Although the war is essentially over in Syria, the refugees are not willing to relocate to their country of origin as they have already settled in over a decade. Moving back to Syria is getting more challenging and less feasible for the refugees with each passing day. Currently, Turkey hosts more than 5 million Syrian refugees inside the country while providing security and humanitarian assistance to over 3 million Syrians in Syria’s Turkey-controlled regions. As if the crisis was not bad enough, additional migrants from Afghanistan and Pakistan have worsened the situation. Considering that the country is going through a destructive economic and financial crisis as well, the people are increasingly and expectedly looking for a scapegoat to blame for the country’s dire situation.

Like we have seen in Europe, populists are taking full advantage of the economic and migrant crisis to win a share of the public support to challenge the government in the coming elections. In Turkey, the nationalists are leading the way against the government, the migrants, and the refugees. Umit Ozdag, who built his political agenda exclusively on the refugee and migrant crisis, established the Zafer Party, which translates into “Victory Party,” for the sole purpose of “expelling the refugees.” The party frames the higher fertility rates among the refugees and migrants as a “silent invasion” of the country and promises to stop this perceived “invasion” if given a mandate by the people. The Ataman Brotherhood, an armed radical group known for “capturing and violently attacking the Syrian refugees” in the streets, also supports the party (although Ozdag denies any association with the group). The latest poll suggests there is a surprising increase in the support for the Victory Party among the Turks, which clearly shows that the people are increasingly moving away from the established parties to new and more radical ones focusing on the migrant crisis.

As for the main opposition party, the Republican People’s Party (CHP) has lost support because its leadership is unclear about how it plans to solve the current migrant crisis. This was particularly the case after the leader of the party, Kemal Kilicdaroglu, incited a huge backlash among his core supporters by announcing that they would make sure the refugees return to Syria voluntarily—leading many to believe that the CHP would continue Erdogan’s refugee policy uninterrupted. Furthermore, the internal rivalry between Istanbul mayor Ekrem Imamoghlu and Kilicdaroghlu over the presidential nomination for 2023 is estranging people from the party.

All considered, the Turks find themselves in a weird situation where they have both migrant and economic crises simultaneously. And, the mainstream political parties standing against the Erdogan regime are not bringing the proposals the people demand. Under these circumstances, the people are moving away from the traditional and mainstream parties toward more radical political parties, such as Ozdag’s Victory Party, making the political environment toxic and dangerous.

Turkey is currently run by an authoritarian regime that, until the country’s last elections, had retained popular support among the Turks. However, considering the government’s inability to address the migrant and economic crises, the Turks are fast moving away from Erdogan’s AK Party toward other parties, particularly those hostile against the refugees. Despite its melting support among the voters, the Erdogan regime denies this obvious fact, which hints that the regime may opt to rig the upcoming elections to remain in power. As Turkey is a country with more than 80 million people and a politically-aware opposition, any attempt to rig the elections will pose significant risks, such as mass protests and subsequent destabilization of the country. However, an ultranationalist regime would also threaten the lives of many other minorities, such as Kurds and Chaldeans, and potentially lead to a humanitarian catastrophe.

Vugar Bakhshalizade has been covering geopolitical developments around the globe with a particular focus on the Middle East for various local and international media outlets, such as The Jerusalem Post, The National Interest, etc. He has published a research paper on Turkey’s vast investment in Azerbaijan’s energy sector for Georgian Institute of Politics and Heinrich Böell Foundation. He is currently working as Public and International Relations Specialist for French-Azerbaijani University.