Nationalization Isn’t the Answer To The Coronavirus Crisis 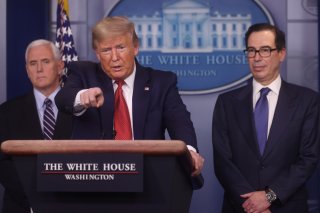 Today, the Trump Administration made a huge mistake.

Ever since the coronavirus leveled the economy and shortages swept the nation, governors, senators and even House Speaker Nancy Pelosi have been begging the president to enact the Defense Production Act (DPA), which lets the federal government take the reins of private businesses during a time of crisis. This legislation would allow the White House to force firms to produce items people have been desperately looking for and coming up short on, like hand sanitizer and ventilators. The frenzy pushed Trump to invoke DPA in an executive order last week, but he noted he’d only utilize it if he had to, saying in a Sunday press conference that he didn’t want the nation to make mistakes other countries had. “Call a person over in Venezuela,” he said. “Ask them: ‘How did nationalization of their businesses work out?’ Not too well!”

However, today, the president used the DPA to force General Motors to make ventilators.

I’m Venezuelan, and I can tell you that Trump was right about something: nationalizing private businesses truly did destroy my country. So, this decision will help no one, but it will have the same terrible results of Venezuelan nationalization, on a smaller scale.

The coronavirus arrived in the United States just about two months ago, and it’s already about to overwhelm hospitals. The United States has the most prepared healthcare system in the world for a pandemic like this one, but there still aren’t enough ventilators or Intensive Care Unit (ICU) beds available for the millions of patients that could very well need them.

Even then, it’s foolish to think that government takeover of businesses will produce millions of additional ICU beds or ventilators as quickly as we’ll need them. That’s because nationalization turns private firms into, essentially, government-controlled factories. That means zero profit incentive, and a lot of political power. And who will the government appoint to run the factory, anyway? Like Trump himself pointed out, if they let the same managers do it, they have no real way to make devices they’ve never before produced.

Yet, the White House thinks it’s a great idea to force an automaker to make medical equipment they have never manufactured.

The DPA embodies the definition of socialism: Government takeover of businesses. And using it will result in a mess à la Venezuela. In my homeland, factories don’t meet their production goals, but, to make people happy, they still hire an excessive number of workers who have to stand around without doing anything useful. When there isn’t a profit incentive, businesses don’t minimize cost or maximize value—they instead only maximize short-term political gain by hiring employees and charging below-cost prices for the goods they produce.

Venezuela isn’t the only place where nationalization fails. Even in Norway, one of the least corrupt nations in the world, state-owned enterprises generally underperform compared to private businesses, especially in the sectors where private businesses compete against the government.

Scarily enough, the DPA may also be used to allow for government-sanctioned theft, permitting the confiscation of test kits or even “hoarded” toilet paper for the government to redistribute. In what world would this not push people and businesses to hide their property or to avoid investing out of fear of expropriation in times of crisis? This policy isn’t just terrifying, it’s also exactly what would worsen the current recession and set a deeply dangerous legal precedent.

In a dose of cruel irony, the reason we even have shortages in the first place is because of the government’s restrictive regulations. Back in February, the Food and Drug Administration (FDA) needlessly blocked successful commercial tests developed by private companies around the world. Only on February 29, after the CDC had released a flawed test, did the FDA authorize some new commercial tests.

But if the FDA and other agencies get out of the way of the private sector, more Americans could produce more and cheaper COVID-19 tests, face masks, and all needed medical supplies. Many have already shown they can.

The government could also go a long way in helping private companies produce more needed goods by ending state anti-price gouging laws. Items like hand sanitizer, toilet paper and other goods are in short supply at stores, not because of panic hoarding, but because producers aren’t allowed to raise the price of these items. In Venezuela, when the government-imposed price controls, I suddenly saw more and more empty aisles in the grocery store. Sure, raising prices may seem inhumane during a crisis, but it’s actually the most humane thing to do. It would end the shortages by encouraging businesses to produce more of these items and making sure people buy only what they need.

In all of the madness, the president would do well to publicly encourage states to suspend these laws during the pandemic. Maybe he could even use his emergency authority to override them himself, rather than use it to take away Americans’ private property. After all, if America is to beat the Coronavirus, it won’t be through the failed central control that wrecked my homeland. It’ll be the way it has overcome every other challenge—with a whole lot of freedom.

Daniel Di Martino (@DanielDiMartino) is an economist, contributor to Dissident and Young Voices, and a Research Associate at the Institute for the Study of Free Enterprise at the University of Kentucky.