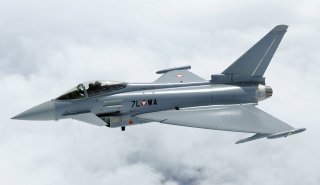 Typhoons Are Too Much Fighter for Tiny Austria

Austria is a tiny, politically neutral country with no nearby enemies. And yet its air force possesses 15 high-performance Typhoon jet fighters.

Not only are the twin-engine, supersonic warplanes unnecessary in light of Vienna’s defense needs—they’re also too expensive for the government’s modest military budget.

The 15 Typhoons rarely fly. And when they do, they carry only a tiny fraction of the weaponry that other Typhoon operators—the U.K., Germany, Spain, Italy and Saudi Arabia, among others—routinely hang on the high-tech fighters.

And in stark contrast to other countries—which usually employ twice as many pilots as they have fighters, thus ensuring there’s always someone available to fly a particular plane into battle—the Austrian air force’s payroll is sufficient for just 11 front-line Typhoon pilots and one trainee.

It should come as no surprise that, in 2017, the Austrian government announced it would retire the Typhoons as early as 2020 and replace them with more-affordable planes. The decision came as Vienna investigated allegations of corruption in the air force’s 2003 acquisition of the Typhoons.

A new government put on hold the retirement. But the Typhoon’s woes continue in Austria.

On any given day, just three Typhoons are combat-ready with pilots and weapons—and only between 8:00 a.m. and 4:00 p.m. Their operating budget allows for a combined 180 minutes of flying per day within those business hours.

The Typhoons take off so rarely that, at current usage rates, the airframes could last for centuries with adequate upkeep. Unlike, say, U.S. Navy F/A-18s, which fly so often that the Americans worry about them wearing out after just 20 years of use.

And when Austria’s fighters do launch—to patrol over some high-profile meeting or to escort a wayward airliner—they often carry only a single, short-range air-to-air missile.

So much warplane for so little firepower.

To be sure, Austria needs some warplanes. Most industrialized countries—isolated New Zealand is one exception—possess at least a few jet fighters for aerial self-protection, otherwise known as “air policing.”

But countries of Austria’s size, wealth and situation—nine or ten million people, a GDP of a few hundred billion dollars, no immediate military threat—tend to favor inexpensive fighters. The Czech Republic and Hungary each bought 14 copies of Sweden’s single-engine Gripen fighter, priced to move at just over $60 million apiece.

In the early 2000s, Austria rejected the Gripen in favor of the $125-million Typhoon, even though Austria’s previous fighter had been the 1950s-vintage Draken, the Gripen’s uncomplicated Swedish predecessor.

It would be years before Vienna’s preference began to make sense. In November 2012, German police raided the Hamburg home of one Frank Walter P., looking for evidence of corruption.

“During the sale of Eurofighter Typhoon jets to Austria, an estimated €113.5 million ($144 million) is believed to have been transferred from [Eurofighter member] EADS to the accounts of dubious companies,” Der Spiegel explained.

“Public prosecutors in Vienna and Munich suspect that the millions of euros may have been used to bribe Austrian decision-makers—or as kick-back payments to greedy EADS managers—or perhaps to establish slush funds within the consortium.”

In any event, in the early 2000s Vienna wanted 24 Typhoons. Then leftists gained power in Austria’s 2006 elections. Vowing to cancel the Typhoon deal, they discovered that the cancellation fees would have been more than a billion dollars.

So instead they cut the order to just 15 copies of the most basic “Tranche 1” Typhoon—and ultimately paid for just a few IRIS-T heat-seeking missiles, 12 pilots and no more than 1,070 hours of flight time per year for the whole fleet.

After all, with an annual military budget of just $4 billion, that’s all Austria can afford. Every Typhoon flight hour costs as much as $15,000 once you count fuel and maintenance. A Gripen can fly for an hour for around $5,000.

The operational cutbacks are the inevitable result of a small country buying too much fighter. And limited flying time can have dangerous consequences. Austria’s air force doesn’t have many responsibilities, but it must at least protect the country’s air space.

That’s hard to do with three hours of flying per day. Just ask the Swiss. On the early morning of Feb. 17, 2014, the copilot of an Ethiopian Boeing 767 airliner flying from Addis Ababa to Rome hijacked the plane and its 202 passengers while the pilot was in the toilet.

Italian jet fighters intercepted the airliner and, later, French jets followed it until it landed in Geneva. The Swiss air force was unable to send its own F-18 fighters to help with the aerial policing … because Switzerland’s flying branch wasn’t yet open for business.

Realizing it’s got its own gap, the Austrian defense ministry in late 2014 announced it would upgrade 12 of its nearly 50-year-old Saab 105 combat trainers, which are subsonic and even more lightly armed than the Typhoons. The Saab 105s would fly 1,200 hours of air policing every year, 130 hours more than the Typhoons.

Three years later in 2017, the Austrian government announced it would retire the Typhoons and the Saab 105s starting in 2020 and replace both types with 18 new fighters of a cheaper type.

The decision escalated Vienna’s feud with EADS, which had rebranded itself as Airbus and was still the major firm in the Eurofighter consortium. In 2018 Airbus agreed to pay $100 million to settle the German investigation into corruption related to the Austrian fighter purchase.

The same year, a new right-wing Austrian government suspended the country’s own investigation of the corruption allegations -- and also canceled the plan to retire the Eurofighters. In 2019 the Austrian air force grounded the Saab 105s after the Swedish air arm found cracks in its own Saabs’ tail structures.

For better or for worse, that left the Typhoons as Austria’s only fighters.