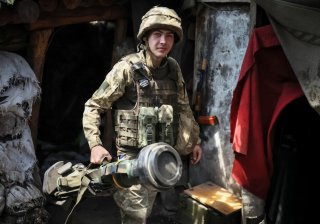 NATO and the EU are sounding the alarm over the rising threat of weapons smuggling out in Ukraine, according to a Financial Times report.

Several NATO countries are in talks with Kyiv over implementing a tracking system for the historically unprecedented volume of military aid pouring into Ukraine as the Russian invasion continues into its fifth month, Western officials familiar with the discussions told the Financial Times.

Another source told the Times that Ukraine’s government is currently working on a tracking system with the help of Western countries. “All these weapons land in southern Poland, get shipped to the border and then are just divided up into vehicles to cross: trucks, vans, sometimes private cars,” one of the officials said. “And from that moment we go blank on their location and we have no idea where they go, where they are used or even if they stay in the country.”

U.S. officials previously said they have no means to track the weapons they send to Ukraine after they change hands at the Polish border. “Then it’s up to the Ukrainians to determine where they go and how they’re allocated inside their country,” said Pentagon press secretary John Kirby.

Czech defense minister Jana Černochová seemed to suggest to reporters that some amount of weapons smuggling is inevitable in Ukraine. “It’s hard to avoid trafficking or smuggling — we didn’t achieve it in former Yugoslavia and probably won’t avoid it in Ukraine,” she said.

Senator Rand Paul (R-KY) attempted to redress the current lack of oversight during the passage of a $40 billion Ukraine aid package in May. Paul moved to amend the mammoth aid bill with the appointment of a special inspector general to monitor exactly how the funds are being spent. Senate Minority Leader Mitch McConnell (R-KY) teamed up with Senate Majority Leader Chuck Schumer (D-NY) to get the bill through the finish line with any amendments.

Russian and Bulgarian media outlets have published unverified reports alleging that some of the Western military aid, notably including France’s CAESAR self-propelled howitzers, is being sold to Russia by Ukrainian actors through proxies and intermediaries. Ukraine’s Economic Security Bureau chief Vadim Melnik reportedly acknowledged that cases of illegal resales of Western-provided weapons in Ukraine were confirmed and are being investigated.

Kyiv officials have dismissed rising concerns over weapons smuggling in Ukraine as a Russian propaganda ploy. “All the weapons received by Ukraine, including long-range ones, are carefully accounted (for) and sent to the frontline,” said Presidential advisor Mikhailo Podolyak. “All the other ‘rumors’ are banal propagandistic throwaways aiming to disrupt supplies.”

EU officials announced earlier this week that they are creating a center, called the “EU Support Hub for Internal Security and Border Management,” in Moldova to stem arms and human trafficking in Ukraine.