NATO to Bolster Its Eastern Flank in Response to Russia's Invasion 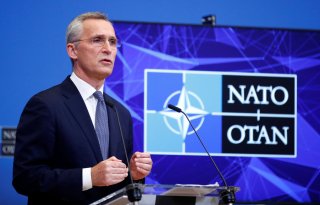 NATO has announced plans to increase its troop presence on the alliance’s eastern flank amid Russia’s ongoing assault on Ukraine.

"Peace on our continent has been shattered," said NATO Secretary General Jens Stoltenberg during a virtual emergency summit on Thursday. Stoltenberg described Russia’s assault as “a deliberate, cold-blooded and long-planned invasion” that is “putting countless innocent lives at risk with air and missile attacks."

The alliance now seeks to deploy the NATO Response Force to reinforce its posture in Eastern Europe. NATO also plans to establish combat units in more Eastern European countries, including Romania and Bulgaria. Slovakia, which was previously reluctant to host foreign NATO forces within its borders, has signaled its willingness to participate in new plans.

Despite ongoing measures to fortify the alliance’s eastern flank, Stoltenberg reiterated that NATO has no plans to put boots on the ground in Ukraine. "There are no NATO combat troops, no NATO troops at all inside Ukraine. We have made it clear that we don't have any plans and intention of deploying NATO troops to Ukraine," Stoltenberg said. "What we have made clear is that we have already increased and we are increasing the presence of NATO troops in the eastern part of the alliance on NATO territory."

Earlier this week, the Biden administration ordered U.S. troops already based in Europe to move eastward in an effort to reinforce the Baltic states and Poland. Biden also approved the transfer of up to eight F-35 Lightning II stealth fighters from Germany to “operating locations on NATO’s eastern flank.” Twenty AH-64 Apache attack helicopters will also be deployed from Germany to the Baltics.

Russian forces staged a large-scale attack on Thursday, delivering cruise and missile strikes against dozens of military targets spread across Ukraine. The Russian operation drew widespread condemnation from Western leaders, who stressed that they intend to make Moscow pay a steep price for invading Ukraine. Boris Johnson, the United Kingdom’s prime minister, promised a “massive package of sanctions” to “hobble Russia’s economy.” Johnson is also pushing for Russia to be cut off from the SWIFT global payment system. However, Reuters reported on Thursday that the European Union is currently unwilling to take this step. The White House is set to impose additional punitive measures on Moscow this week, reportedly including direct sanctions on members of Vladimir Putin’s inner circle and steps to restrict Russia’s access to international financial institutions.