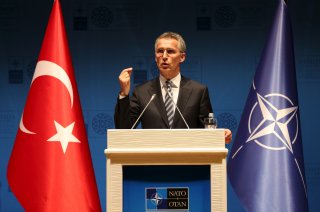 In a meeting with Turkish foreign minister Mevlut Cavusoglu, NATO secretary general Jens Stoltenberg urged the Turkish government to approve Sweden and Finland’s dual bids for entry into the military alliance, claiming that both countries were ready according to NATO’s accession protocols.

“It’s time to welcome Finland and Sweden as members of NATO,” Stoltenberg said at the two officials’ joint press conference in Istanbul. “In these dangerous times, it is even more important to finalize their accession, to prevent any misunderstandings or miscalculation in Moscow” amid Russia’s invasion of Ukraine, now entering its ninth month.

Sweden and Finland both fiercely condemned the Russian invasion in February. In the months that followed, Stockholm and Helsinki vowed to abandon their traditional positions of military neutrality in Europe, and both nations’ parliaments approved their entry into NATO by a wide margin. The two countries’ accession protocols were signed in May, and although NATO accession normally takes several years in order to ensure interoperability between constituent nations’ forces, both nations had already cooperated extensively with NATO, allowing the alliance to “fast-track” their approval process.

So far, twenty-eight out of NATO’s thirty member nations have approved the two nations’ accessions. The two remaining nations are Hungary, which has submitted the approval bill to parliament for consideration, and Turkey, which has declined to approve the bid until both nations meet several unrelated conditions, including a ban on Kurdish groups that Turkey regards as terrorist organizations such as the Workers’ Party of Kurdistan (PKK) and other affiliated movements.

While both Sweden and Finland agreed to meet Turkey’s conditions in June, they have not yet passed certain laws codifying them, and Cavusoglu noted during the press conference that it was “not possible to say” that the two countries’ commitments had been fulfilled. The Turkish foreign minister acknowledged, however, that both Stockholm and Helsinki had taken steps toward compliance with the agreement, including by suspending restrictions on arms exports to Ankara.

“We don’t intend to harm NATO or block its enlargement, [but] we want to see concrete steps,” he said. In turn, Stoltenberg argued that both nations were “committed to [a] long-term partnership with Turkey” and had begun the process of meeting their commitments under the agreement.

Because prospective NATO entrants must receive unanimous approval from the alliance’s existing members, the alliance’s members have great latitude to exact political concessions on unrelated issues and can veto the bid until those concessions are met. In one recent case, Greece vetoed the entry into the alliance of the “Republic of Macedonia” over its name, claiming that it infringed on Greek sovereignty over its own Macedonian region and refusing to approve its accession. After Macedonia changed its name to North Macedonia in 2018, Greece suspended its objections to the entry process, and it was admitted in 2020.