NATO Exercise off the Coast of Norway Focuses on Naval Integration 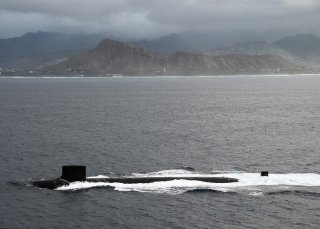 The U.S. Navy kicked off an exercise off the coast of Iceland, which is situated along NATO’s North Atlantic flank, with the aim of practicing naval integration between the alliance’s member states.

Vice Adm. Gene Black, Commander of the U.S. Sixth Fleet, noted that “the strong relationship between the U.S. and Iceland, especially in the maritime, dates back more than 70 years.” “We look forward to operating side-by-side with our Icelandic Allies while enhancing professional relationships and improving overall coordination with Allied Nations.”

Iceland is one of the NATO alliance’s founding members, and it plays an important role within the alliance due to its strategic location. The ocean surrounding the island forms part of the “GIUK gap,” a strategically important body of water between Greenland, Iceland, and the United Kingdom.

The area is a naval chokepoint separating the Norwegian Sea from the Atlantic Ocean. During the Cold War, the area was particularly important for monitoring Soviet submarine activity.

The Navy’s press release highlighted the importance of the GIUK Gap, explaining that “NV22 strengthens interoperability and force readiness between the U.S., Iceland and Allied Nations and enables execution of multi-domain command and control of joint and coalition forces in the defense of Iceland and the Sea Lines of Communication in the Greenland-Iceland-United Kingdom Gap."

The multinational exercise includes “amphibious landings, expeditionary and construction capability, search and rescue, and humanitarian assistance with forces demonstrating skills in events across multiple domains, climates, and vignettes to enhance interchangeability and interoperability.”

The Navy’s 6th Fleet has been quite busy in recent months. In addition to exercises in the waters near Iceland, the Sixth Fleet recently established a new task force aimed at enabling the Marine Corps and Navy to work together to track and eliminate threats both above and below the surface of the sea.

“We are ready to host once again the Northern Viking exercise with our American counterparts here in Iceland,” said Iceland’s minister for foreign affairs, Thórdís Kolbrún Reykfjörd Gylfadóttir.

“We enjoy a strong and enduring relationship with the United States and we look forward to a highly successful event.”