NATO Is 'Hunting' Its Own Submarines. And Russia is the Reason Why. 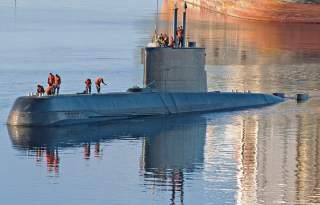 While much attention was given to the recently concluded NATO Summit, the alliance has quietly been busying trying to hunt its own submarines.

From June 25 to July 6, 2018, seven NATO members participated in the annual Dynamic Mongoose exercise. Held off the coast of Norway, the exercise seeks to sharpen the alliance’s anti-submarine warfare (ASW) capabilities at a time when Russia is replenishing its undersea fleet.

Denmark, France, Germany, the Netherlands, Norway, Spain, Turkey, and the United States were the members that took part in the exercise, according to a NATO press release. The drill consisted of two Norwegian submarines trying to evade the combined capabilities of the eight participants. Norway's only submarines are its six Ula-class diesel electric boats.

Among those hunting the Ula subs were seven surface ships from Denmark, the Netherlands, Poland, Spain and Turkey operating under the command of Standing Maritime Group One (SNGM61). Although the press release did not identify the ships that participated, Naval Today said the fleet consisted of two Dutch frigates, one frigate each from the four other countries, as well as a Polish tanker.

“To better enhance their interoperability and proficiency in anti-submarine and anti-surface warfare skills, each surface ship will have the opportunity to devise and execute a variety of tactics to locate and track submarines,” the NATO press release said.

The surface ships were joined by Maritime Patrol Aircraft from Germany, Norway, and the United States. These aircraft flew out of the Andoya Air Base in Norway and were under the operational command of NATO Maritime Air Command (COMMARAIR).

Once again, the press release did not identify the specific aircraft that participated but Germany and Norway typically use P-3 Orions for maritime patrols. Other reports said that the United States’ contribution was the P-8A Poseidon anti-submarine warfare aircraft, which are replacing the P-3s. Norway is among the countries buying the P-8s.

“NATO’s annual anti-submarine-warfare exercise DYNAMIC MONGOOSE remains one of the most challenging exercises and an excellent opportunity for NATO nations’ naval forces to practice and evaluate their Anti-Submarine skillset in a challenging environment,” Rear Admiral Andrew Lennon, NATO Submarines Commander, was quoted as saying in the press release.

He added: “This exercise is a unique opportunity to enhance naval forces’ warfighting skills in all three dimensions of Anti-Submarine-Warfare in a multinational and multi-threat environment.”

Dynamic Mongoose is not the only ASW exercise NATO conducted this year. The much larger Dynamic Manta was held in March in the Mediterranean off the coast of Sicily.

Beyond drills, there are increasingly frequent real life opportunities to hone the alliance’s ASW skills by tracking Russian submarine patrols.

Last year Admiral Vladimir Korolyov, the head of Russia’s Navy, claimed Moscow’s submarines spent 3,000 days at sea in 2016. Assuming each patrol is between four and six months long, that means Russia conducted between 17 and 25 submarine patrols that year.

Some of these patrols are tracked by NATO. For example, during the spring and summer of 2017 the alliance spent months following a Varshavyanka-class diesel-electric submarine, which Moscow bills as "the quietest submarines in the world.”

In a November 2017 article in the Wall Street Journal , Julian Barnes details the enormous lengths the alliance went to over the course of three months to track the submarine on a journey that took it from the North Sea to the Mediterranean.

NATO’s efforts began with the Dutch following the Russian sub while it was in the North Sea, before a British ship took over when it approached the English Channel. A Spanish patrol boat temporarily helped out before the submarine reached Gibraltar, when an American cruiser assisted by a P-8 followed the vessel into the Mediterranean.

Once there the submarine launched missile attacks on Syria and lingered for weeks in a cat and mouse game with NATO. At one point, the U.S. Navy became concerned that it could target an American aircraft carrier in the region.

It’s unclear from the article how well the Western naval forces fared in keeping tabs on the Russian sub when it was submerged. A U.S. naval officer said that the submarine’s second missile salvo into Syria was monitored by a French frigate and U.S. naval aerial surveillance.

In 2003, a Chinese Submarine Sank Mysteriously. How the Crew Died Is Horrifying.