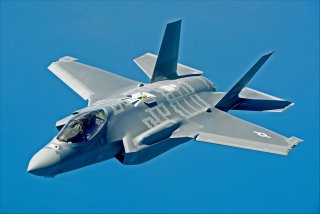 Italy, Norway, Poland, The Netherlands, the U.S., and the U.K. are all increasing joint 4th-Gen aircraft-F-35 interoperability exercises with one another, as the Pentagon looks to strengthen NATO ties and increase its Russia-oriented deterrence posture throughout the European continent.

The numerous activities seek to not only leverage F-35 multinational networking and joint operational capacity but also extend beyond the 5th-Gen fighter to include 4th-Gen aircraft and many non-F-35 countries of great significance to the U.S. and NATO.

Speaking recently at the Air Force Association Symposium, Gen. Jeffrey Harrigian, Commander, U.S. Forces Europe, and Africa, told reporters that the U.S. continues to “make the most” out of NATO partners without the F-35. “The French and Germans are working together on a 6th Gen aircraft and I believe that is a good thing. I wish them great success in that,” Harrigian said.

New technical methods of connecting F-35s to F-22s and 4th Gen aircraft continue to emerge and maintain a priority focus for NATO leaders, he added. Some of these methods include innovations related to LINK 16 enabling both send and receive capability between F-22s and F-35. There are also newer radio technologies such as the Freedom 550 which permits F-35s and F-22s to connect with one another while preserving “stealth mode” by operating with a more narrow or linear electromagnetic connection.

Stealth mode is preserved by a Northrop anti-jam integrated software-defined radio device called Freedom 550. Software programmable radio works by sending IP packets of data through waveforms to transmit combat-relevant information. Phan explained that there can be one multi-function box that does as many as twenty-five different functions. Stealth mode is sustained, Phan explained, by using a smaller number of modules to connect the two data links together through a converter. Fewer modules help preserve stealthy communications by virtue of decreasing the RF emissions of an omnidirectional antenna which is more likely to be detected. The smaller or more narrowly configured the electromagnetic signature, the less detectable a communication becomes. The broader the signal and the wider the emission, the larger the potentially detectable electronic signature, something which can of course complicate necessary efforts to preserve stealth operations.

Networking, target data sharing, and integrated efforts to shorten sensor-to-shooter timeframes throughout Europe are all at the center of Harrigian’s conceptual emphasis, something which relies heavily upon connectivity among F-35s and between F-35s and other aircraft. For example, Norway was the first European F-35 country to receive the 3F software upgrade containing crucial threat library data, according to an Air Force report in 2017. The F-35 threat library, called Mission Data Files, consists of compiled threat identification data that can be networked or shared in real-time between F-35s.

“We have worked aggressively to develop our 5th to 4th interoperability tactics. As we look at the digital infrastructure, it is important to our ability to push data across the different platforms we have operating. This includes not only airborne platforms but multiple platforms to provide us the fusion. We need to be able to manage targets and track where we are in terms of finding the targets and engaging. We want to communicate from the operational level down to the wing level,” Harrigian said.

Harrigian emphasized the importance of this kind of networking throughout Europe and specified recent F-35 interoperability activity between the U.S. and Italy, The Netherlands, and Poland. Poland solidified its purchase of thirty-two F-35As in January of last year, becoming the 10th North Atlantic Treaty Organization member to operate the jets. Harrigian also praised Sweden and Finland's cooperation in interoperability exercises, explaining that those two Scandinavian countries were crucially important to Arctic security initiatives, among other things.