NATO Reliance On Iceland Grows Amidst War in Ukraine 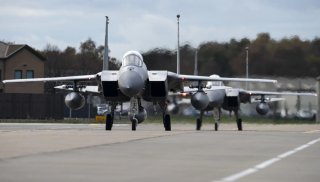 During a recent visit to Iceland, the Chief of Naval Operations Adm. Mike Gilday emphasized the island’s importance to North Atlantic and Arctic security.

“Iceland is the geostrategic linchpin for NATO in the Arctic region and I am grateful for their partnership and collaboration,” said Gilday in a U.S. Navy statement. “The Arctic is an opportunity to work collaboratively with Allies and partners to keep this a secure and stable region, and we are committed to working together to address challenges and strengthen our collective deterrent against strategic challenges,” he continued.

Located in the far north, Iceland is an important refueling location for NATO aircraft and a vital port for allied ships transiting the northern Atlantic Ocean. “It’s a confident feeling to be aware of a great ally with large-scale resources available to back up and assist the Icelandic Coast Guard when and if the scope of its challenges exceeds the capability of the organization and the Icelandic safety system on the ocean around Iceland,” said Director General of Icelandic Coast Guard, Rear Admiral Georg Kristinn Lárusson. “It is also very beneficial to receive training, education, and development assistance in fields in which the Iceland Coast Guard is not fully developed.”

The island also forms an important part of the GIUK Gap, a naval choke point in the North Atlantic, midway between Greenland and the United Kingdom. NATO  effectively exploited this choke point during the Cold War, building a gauntlet of acoustic listening devices to listen for and monitor Soviet submarines transitioning the Norwegian Sea for the Atlantic Ocean.

“The Navy’s role has never been more consequential or more expansive, and we need a combat credible naval force that can protect our interests in peace and can prevail in combat, while supporting our Allies and partners,” said Adm. Gilday. “The Sailors here in Iceland are just that, they remain postured, and ready, with a credible force to assure, deter, and defend in an increasingly complex security environment, which is possible because of the support and partnership we have with Iceland.”

With war raging in Europe, the importance of Iceland and the GIUK Gap is once again at the forefront of NATO concerns, a fact reflected in recent military exercises involving the island nation. In April, the U.S. and Icelandic navies conducted the Northern Viking 2022 exercise, an interoperability and command-and-control exercise that focused on the defense of Iceland as well as maintaining communication and sea lines in the GIUK Gap.