NATO vs. Russian Bombers in the Baltic Means Trouble 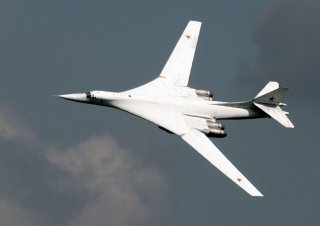 It could be described as quite a development, and not something likely to be seen often: an Italian F-35 escorting missile-armed Russian Tu-160 bombers over the Baltic Sea.

The development, described in a report from Russia’s TASS news agency, included other escorts on the flight to include Danish F-16 fighters and a Swedish Gripen aircraft.

The escort was fundamentally peaceful and supportive, as it took place in neutral waters. It may be a stretch to call it actual cooperation on any kind of a military scale, but the development might suggest a potential opening for better relations between Russia and the West. There is a certain irony to the development, given that European F-35s are in large measure expanding throughout the continent with U.S. allies in large measure to deter potential Russian aggression.

At the same time, there does appear to be an agreed-upon consensus that neutral territories are, in fact, neutral. It is the fundamental reason why intercepts, flybys, or approaches that are too close become such points of contention as they run counter to the spirit of neutral international passage.

The location is quite significant here as well, given that the Baltic Sea is a vital strategic area connecting Northern Europe with Scandinavia and of course Russian coastline, making it an all but certain travel route in the event of war. The other element of this is surveillance. While the Italian and Danish jets may have primarily sought to engage in peaceful, cooperative maneuvers, having a presence in the vicinity of the Russian Tu-160s allows them to function as deterrents as well and potentially hold the bombers at risk should there be any chance of hostility.  Should Russian bombers fly over the airspace of a Northern European or other U.S. allied nation, tensions would be all but sure to rise significantly. It is unlikely that a Tu-160 has sensors long and accurate enough to scope key target possibilities from the Baltic Sea. However, it could be possible depending upon how close to the coastline the bombers traveled.

While the heavy, supersonic the Tu-160 Russian bomber first flew as far back as the early 1980s, a number of upgrades in recent years have improved its capacity in the areas of electronic warfare, engine upgrades, radar, and avionics, according to a 2014 report from Jane’s Defence.

Being from the 80s, the Russian bomber is much newer than the 1960s-era U.S. B-52, yet it may not compare in terms of performance given the massive extent to which the U.S. has reworked and modernized the B-52.