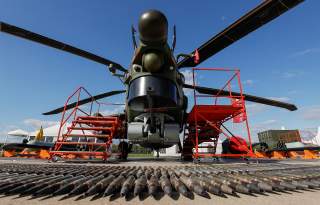 A problem or just hype?

The United States has the right tools to take on Russian anti-access/area denial (A2/AD) zones in the European theatre, but it does not have enough capacity to take on Moscow’s new bastions head-on. Moreover, the U.S. military is overly reliant on air power to defeat those emerging threats.

“We have the tools, but we do not have nearly enough of them—and the speed that we would need to eliminate these A2/AD bubbles—to be able to deploy our forces is going to be controlled by the depth of the bench of how we can attack those A2/AD forces,” retired U.S Air Force Gen. Philip Breedlove, former commander of U.S. European Command told an audience at the Center for Strategic and International Studies on June 29. “Right now, we’re almost completely dependent on air forces and aviation assets in order to attack the A2/AD problem.”

But air power might not be enough. Breedlove suggests that U.S. ground forces should play a role in taking on the Russian A2/AD threat. “We need more long-range, survivable, precision strike capability from the ground,” Breedlove said. “We need dense capability—like the dense A2/AD networks that we face.”

However, Breedlove did not address if the ground-based capability he seeks would be compatible with the Intermediate Range Nuclear Forces (INF) Treaty, which prohibits ground-launched ballistic and cruise missiles with ranges of between 500 and 5,500 kilometers. It is possible that Breedlove was suggesting a weapon that falls within the confines of the INF treaty—similar to the Russian Iskander-M.

Breedlove also suggested that NATO should examine the possibility of setting up its own offensive A2/AD capabilities. Breedlove said he regards Russian A2/AD zones to be inherently offensive in nature and suggests the U.S. should respond in kind. “Do we create our own anti-access/area-denial capability?” Breedlove asked. “That is a big decision.”

Evelyn Farkas, who until recently served as the deputy assistant secretary of defense for Russia, Ukraine and Eurasia, said that while Moscow has been modernizing its forces—compared to the United States—the Kremlin’s planned military investments of about $700 billion over 10 years are relatively paltry. However, Russia has been strategic with its outlays. “It’s not as if they’re modernizing across the board,” Farkas said. “But they’re doing it in a very clever way, and so they’re increasing their capabilities in certain key conventional areas...cruise missiles, the air defense systems etc. Which are causing quite a problem for us.”

Lisa Sawyer Samp, a senior fellow at CSIS’ International Security Program, said that the U.S. capability gap with regard to Russia is real, but it is regionally focused in Central and Eastern Europe. Moscow simply cannot go toe-to-toe with Washington across the globe as the Soviet Union once did. “I want to be clear that the Russian military is not a Goliath,” she said. “It cannot outmatch the United States across global battlefields. It does, however, possess advanced capabilities—that as currently arrayed—could plausibly challenge the United States and its allies regionally.”

Samp said that there are three key areas where Russia either already has or is starting to gain an advantage. One is A2/AD, the second is combined arms warfare and the third is cyber and electronic warfare. “These capabilities will have to be factored in future Army planning [and] procurement priorities.”

While U.S. and European officials have voiced their alarm over Russian nuclear saber rattling, Farkas said that she does not believe the Russian “escalate to de-escalate” doctrine necessarily focuses on tactical nuclear weapons employment. “It’s actually not that, it’s denying your adversary the ability to get in to intervene in an ongoing or imminent military action that the Russian government wants to take,” Farkas said. “So can they use cyber means, they can use space, they can do anything to basically escalate the situation to a point where the United States or other European allies might say: ‘oh, we’ll keep out of that.’”

Nonetheless, Farkas conceded that “de-escalation” could potentially involve a nuclear demonstration or even nuclear use. “But I don’t see it necessarily being about nuclear,” she said.