Naval Expert: Don't Waste Your Money on Submarines (Technology Will Make Them Obsolete) 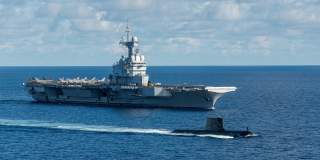