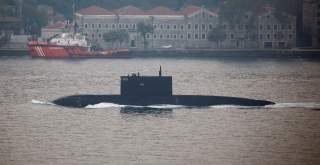 Virginia vs. Yasen: What Happens if the World's Two Best Submarines Went to War?