Naval Nimbleness: Watch a Navy Aircraft Carrier Turn on A Dime on the Open Seas 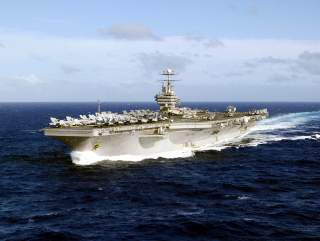 At 1,092 feet long, 252 feet wide and nearly 100,000 tons of naval engineering expertise, the nuclear-powered Nimitz-class aircraft carrier wasn’t designed to chase Russian submarines or blow up Somali pirates, but to serve as a floating hub for American airpower across the planet. Its motto of “shall not perish,” culled from Lincoln’s Gettysburg Address, is no wishful thinking: the Lincoln wasn’t just built to fight, but endure.

OK, sure, it’s not totally the same as watching a third-generation Soviet-made T-80 battle tank pull off turns ripped from “The Fast and the Furious: Tokyo Drift” — technically, the Lincoln’s pulling off a totally different kind of “drift” than the type Japanese street racers talk about, but that’s a conversation for another day. There’s still something awe-inspiring about watching a massive piece of the Pentagon’s power-projection apparatus doing tricks on the open sea.

- Here’s How Marines Fared On The New Physical Fitness Tes