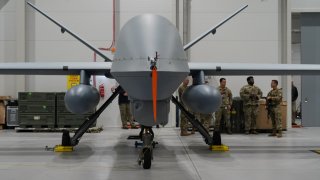 General Atomics, the American aerospace company behind some of the world’s most well-known unmanned aerial vehicle (UAV) designs, showed off what could become the U.S. Navy and Marine Corps’ newest UAV: the MQ-9B short take-off and landing (STOL) aircraft.

The aircraft is a variant of the Reaper drone, an aircraft that made its combat debut in 2007 during the United States' intervention in Iraq.

The General Atomics press release announcing the aircraft explained that the company would be releasing a conversion kit that maintainers can install on a standard Reaper aircraft that would afford it the short take-off and landing characteristics necessary for carrier operations. “The MQ-9B STOL configuration will consist of an optional wing and tail kit that can be installed in less than a day. The core aircraft and its sub-systems remain the same. Operators can perform the modification in a hangar or on a flight line, delivering a capability that otherwise would require the purchase of a whole new aircraft.”

A video released on Twitter by General Atomics showed a converted Reaper in the STOL configuration taxiing and taking off from a U.S. Navy aircraft carrier. The video also shows that the kit would allow the modified Reaper to fold its wings upward like other U.S. Navy aircraft, giving it a smaller on-deck footprint. “Imagine taking the hard top off your Jeep. You lift it off, stow it in your garage and now you’ve got an open vehicle. If it rains, you put the hard top back on,” said General Atomics Aeronautical Systems president David R. Alexander. “We’re the same. Take a standard MQ-9B, put the STOL kit on, and then go fly.”

“STOL means we can take this incredibly capable, long-endurance aircraft and get into and out of more airfields in more places. If you need to have these aircraft switch up where they’re operating–either because you don’t have a long, conventional airfield, or because you don’t want an adversary to know where one might land after a mission–you have numerous options about where you can operate,” Alexander explained.

The MQ-9B conversion kit emphasizes flexibility and modularity. “You could mix and match if you want: take off from a big, conventional airfield that everybody knows about, fly your mission, and then head to some short field somewhere that no one was expecting might recover a UAV,” Alexander said. He added that the kit would also allow forces to stage missions out of “one short field and go to another short field and create all kinds of disruptions for the other guy trying to keep track of where you might be or where you might be headed.”

Though not yet in production, General Atomics’ new unmanned aerial vehicle offers a unique mix of affordability, modularity, and flexibility.