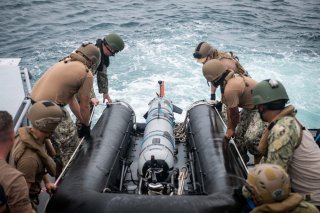 The U.S. Navy’s vision for its future fleet involves plans to operate a 500-ship fleet with as many as 150 unmanned systems, marking a substantial move toward paradigm-changing levels of manned-unmanned teaming, long-range sensors and weapons and, perhaps of greatest significance, once-unthinkable levels of autonomy.

While the call for 150 unmanned platforms articulated in the Chief of Naval Operations Navigation Plan 2022 may seem dramatic, the Navy has for many years now been progressing intensely on what can only be called a drone explosion. Given these numbers, it is no surprise that, alongside the Navy’s multifaceted programs to engineer unmanned surface vessels, the service also plans a massive expansion in undersea drones as well. The Navy’s 2023 budget request incorporates this emphasis with a request to procure as many as twenty-two new small and medium-sized undersea vehicles. This initial plan is also merely a starting point from which the Navy plans to further expand its unmanned undersea platforms.

The Navy’s emerging fleet of undersea drones is quite varied, ranging from small semi-autonomous mine-hunting drones all the way up to huge undersea drones such as the Extra-Large Unmanned Underwater Vehicle (XLUUV), which resembles a submarine.

Undersea sonar and drone synergy is greatly improved by new levels of autonomy and semi-autonomy, allowing undersea drones to find and ultimately destroy enemy mines autonomously (when directed to do so by a human decision maker). For example, the Raytheon-built AQS-20 undersea sonar system can network with the Barracuda, a semi-autonomous, mine-exploding drone. The AQS-20 is a submersible, cylinder-like system with four built-in sonars to find mines from the “sea-floor to the near surface in a single pass,” a Raytheon report explains. It operates with side-scanning synthetic aperture sonars, a “wide-band” forward-looking sonar, and a “digital gap” filler sonar to identify mines underneath. Using acoustic ID technology, the AQS-20 generates a high-resolution rendering of a threat object using advanced automatic target recognition.

The initial solicitation for the Barracuda Mine Neutralization System describes it as “a modular, low-cost, semi-autonomous, expendable neutralizer conforming to the A-size sonobuoy form factor.” Navy documents further specify that the Barracuda will use wireless communications, therefore allowing for “tetherless” operation.

Navy leaders have often talked about the importance of engineering the proper “interfaces” or technical infrastructure sufficient to support secure multi-domain connectivity. Much of this is accomplished through the use of common internet protocol standards and a strategy often referred to as “open architecture,” which is intended to favor interoperability among otherwise disconnected platforms and enable the rapid integration of new technologies as they emerge. This strategy could help the Navy accelerate the prototyping, testing, and development of undersea drones as both individual and interconnected unmanned systems.