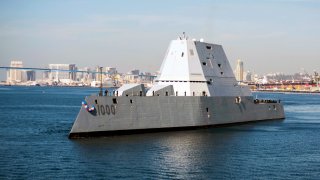 The third and final U.S. Navy stealthy Zumwalt-class destroyer is surging toward ultimate deployment as the service completes Builder Trials development for the future USS Lyndon B. Johnson.

The trails, which include at-sea and in-port demonstrations, are intended to allow shipbuilders the opportunity to assess the ship’s technologies, weapons, and technological systems as a key step toward moving toward war. The second Zumwalt-class destroyer has moved along more smoothly and successfully than the first, in part because Navy ship developers say they have been leveraging lessons learned from the challenges associated with building the first-in-class of the Zumwalts.

It would make sense that there were many lessons to learn and challenges associated with the process, given the scope of new, unprecedented technologies now being built into the ship. The ship’s configuration itself certainly represents new technological paradigms as it is built to be a first-of-its-kind stealthy destroyer. Its smooth sloping and rounded exterior shapes, aligned with a much less jagged deck-hull connection, are all intended to massively lower the radar signature of the ship. Early in the development of the Zumwalt class, a statement from Naval Sea Systems Command maintained that the USS Zumwalt appeared like a “small fishing boat” to radar systems trying to track its movements. While the concept of something as large as a destroyer being stealthy is questionable, certainly fewer protruding structures or sharp edges are indeed likely to make the vessel harder to target if not also somewhat harder to find by enemy radar and targeting systems.

Other Zumwalt innovations include an electric drive-enabled Integrated Power System (IPS) able to generate massive amounts of electrical power for onboard computing, electronics, and weapons. The IPS, according to a statement from Naval Sea Systems Command, generates 1,000 volts of direct current across the ship.

Additional on-board electrical power is among a series of crucial additions as it will be needed to support a new generation of weapons going onto the ship such as lasers. Additional electricity is also fundamental to the ship's advanced Total Computing Environment, an advanced computer network consisting of millions of lines of code engineered to connect fire control, radar, weapons, and shipboard command and control. Ship developers explain that the Total Ship Computing Environment is built to leverage cloud migration and artificial intelligence (AI) as newer technologies emerge.

AI or cloud integration, should that happen in the near future, brings several new dimensions to maritime attack. One initial advantage is that increased virtualization enabled by cloud migration can greatly reduce the hardware footprint. Fewer “boxes” or servers will be required onboard as greater elements of the technical infrastructure become multi-function. Fewer numbers of sensors and data storage technologies allow for better integration and free up what’s called “size, weight and power” opportunities onboard the ship.

Data access is another defining element of cloud migration, meaning sensors, weapons systems, and things like navigational data can be accessed in a faster, more consolidated fashion. When greater automation or AI are added to the equation, sensor, targeting, and weapons information can even be organized autonomously for human decisionmakers to consider.

AI integration could automate sensor and weapon integration by comparing new information against vast volumes of data to analyze and organize combat-relevant data; this will give commanders a much improved sensor-to-shooter time with which to destroy fast-approaching targets.

What this translates into is the prospect of much greater speed of attack for the ship should emerging targets become available, as on-board computer processing could distill, organize, and present key threat information to human decisionmakers much more quickly, enabling rapid and precise counterattacks.