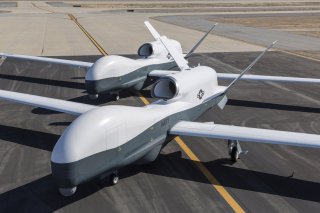 The advent of new networking connectivity and next-generation command and control systems are quickly changing the operational landscape for drones in a position to massively shorten the sensor-to-shooter time, reduce latency and expedite multi-domain targeting and attack.

This prospect, which is not only gaining traction but surging into new levels of mission functionality, is expanding the tactical scope for drone surveillance missions, enabling some of the larger unmanned platforms to accelerate a transition from counterterrorism and counterpiracy to great power warfare preparations.

Now the Navy and Northrop Grumman are taking a new series of steps to prepare the maritime-focused Triton drone with new targeting and collision avoidance technology. The largest inspiration for this appears to be grounded in the Pentagon’s growing success in networking the force for multi-domain, cross-platform target-identification and data-sharing. Connecting “any sensor to any shooter,” at the “speed of relevance” is how Air Force European Commander Gen. Jeffrey Harrigian recently described it to The Mitchell Institute for Aerospace Studies.

Clearly, the intent here is to improve the combat mission envelope for the Navy drone by, among other things, enhancing its ability to track and instantly transmit target details to “shooters” or “effectors” in position to strike. The Triton already performs extensive long-range surveillance missions, yet this effort appears to potentially take the speed, efficiency, processing power and command and control targeting functionality to a new level.  Also, given the growing ranges possible for air-launched weapons and breakthrough advances in targeting and guidance systems, it certainly seems conceivable that a Triton could someday be armed with weapons. However, the Navy has absolutely been very clear that no decision along those lines has been made, and perhaps it is not even part of the current thinking. After all, Mackin told Janes “Triton is not armed.”

“Altitude and endurance are also the ideal characteristics to enable Triton as a communication gateway in support of Project Overmatch objectives,” Doug Shaffer, the vice president and program manager of Triton programs for Northrop Grumman, told the National Interest. “We are committed to delivering a near-term warfighting capability to connect dispersed naval assets with the data they need to execute challenging missions.”