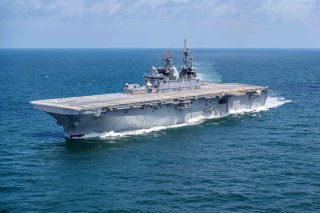 One of the United States Navy’s newest ships, the USS Tripoli, left its homeport at San Diego, California, for its first operational deployment to the Western Pacific.

The USS Tripoli is a part of the group of the United States Navy’s new America-class amphibious assault ships. The class is intended to land a Marine Expeditionary Unit of about 1,100 Marines, sailors, and related combat as well as support equipment using helicopters and V-22 Osprey tiltrotor aircraft.

The America-class is a significant improvement over the preceding Wasp-class. They carry twice the amount of aviation fuel, 30 percent more aircraft munitions, and have more available hangar space to maintain aircraft.

The USS Tripoli recently showcased the United States Marine Corps’ new, so-called “lightning carrier” concept. The force structure saw up to twenty F-35Bs deployed on the carrier to give it a sharper edge in the air and the potential ability to augment aircraft carrier air power.

“For the fleet commander, both options are formidable and sustainable.”

Speaking to USNI News, Lang affirmed the dual nature of the ship: “I’m going to get ready to go over the horizon, and then be prepared to be tasked with one of those two concepts, and then offer the Navy and the Marine Corps, we have a relevant option – you’ve got two of them – and then just based on where we go in the world, what that contingency op is, they can employ one of those two concepts,” he explained.

“So when we get home, that’s what we’re going to do. We’re going to get ready to go over the horizon and be prepared to do one of these two once we get on the other side of the Earth.”

Though the USS Tripoli’s deployment has been a relatively low-key affair, the ship’s deployment in the Western Pacific comes at a time of heightened tensions in both the Indo-Pacific and in Europe.

Further refining the “lightning carrier” concept will afford Navy commanders a greater range of capabilities and offer new operational capabilities. Twenty stealthy F-35B fighters on what is essentially a small aircraft carrier may not seem like a lot, but it fits within the Navy and Marine Corps’ preference for smaller, more decentralized future force structures.