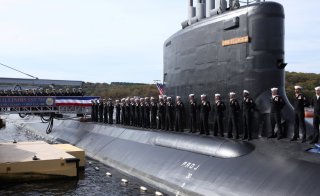 The USS Connecticut—considered one of the U.S. Navy’s next-generation nuclear-powered Seawolf-class submarines—struck an unknown object in international waters somewhere in the Indo-Pacific region over last weekend, according to defense officials.

According to USNI News, eleven sailors on board the submarine were injured in the accident, the officials said, but none were considered life-threatening. The vessel, which is due to arrive in Guam, is in a “safe and stable condition” and its reactor plant remains “fully operational.”

“The Seawolf-class fast-attack submarine USS Connecticut (SSN 22) struck an object while submerged on the afternoon of Oct. 2, while operating in international waters in the Indo-Pacific region. The safety of the crew remains the Navy’s top priority. There are no life-threatening injuries,” U.S. Pacific Fleet said in a statement.

“The submarine remains in a safe and stable condition. USS Connecticut’s nuclear propulsion plant and spaces were not affected and remain fully operational. The extent of damage to the remainder of the submarine is being assessed. The U.S. Navy has not requested assistance. The incident will be investigated,” it continued.

What Did the Sub Hit?

As for what the submarine struck, details remain scarce. Officials, however, have noted that there was no evidence that the object was another submarine.

The Military Times reported that “an official who requested anonymity because they weren’t authorized to speak on the record said that the area’s topography at the time did not indicate there was a landmass in front of the boat. According to Joseph Trevithick at the War Zone, “Connecticut is one of only three Seawolf class boats ever built, all of which were originally designed in the twilight of the Cold War to serve as advanced attack submarines.”

He continues: “Today, Connecticut, along with her sisters USS Seawolf and USS Jimmy Carter, are particularly well known for their ability to cruise quietly for extended periods of time under the ice in the Arctic and are understood to be heavily engaged in intelligence gathering operations, among other specialized mission sets.”

It Has Happened Before

Submarines striking objects underwater “is not necessarily as uncommon as one might think,” Trevithick notes.

Last February, the Japanese submarine Soryu collided with a cargo ship while surfacing in the Pacific Ocean. And just five years ago, the U.K. Royal Navy's Astute-class nuclear attack submarine HMS Ambush struck a commercial tanker off the coast of Gibraltar.

“The U.S. Navy is no stranger to these kinds of accidents, either, with the USS San Francisco infamously suffering major damage to its bow after hitting an underwater seamount in 2005,” he writes.

According to Popular Mechanics, “the ship’s crew were thrown about, some over distances of twenty feet, and the majority of the one hundred thirty-seven-member crew suffered one injury or another—including one that would later prove fatal. Further inspection would explain what happened, and reveal that the submarine’s bow looked like a crushed soda can. USS San Francisco had run into an undersea mountain.”