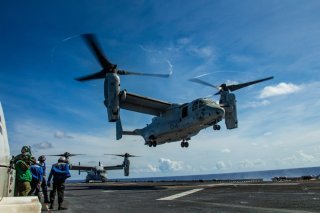 The U.S. Navy’s V-22 Osprey proved its worth during a recent deployment to Haiti. During the deployment, Naval Aviation Training Support Group (NATSG) personnel left at a moment’s notice and interoperated with their Marine Corps counterparts. Though interoperability is a hallmark of the armed services, the star of the show was the V-22 Osprey.

“The Vertical Takeoff and Landing (VTOL) capability of the MV-22 meant it could make use of nearby naval warships as a fuel source and that the aircraft was not limited to runways or other prepared surfaces, allowing supplies to be delivered to more remote, unprepared landing zones when and where they were needed,” a U.S. Navy statement covering the deployment explained.

“Additionally, the MV-22’s extended range and higher cruising speeds allowed it to complete a greater number of deliveries per day than the supporting helicopters, proving it to be the workhorse of the relief effort,” the statement continued.

“Every airframe has its pros and cons. What they did to a large degree of success with the V-22 was to try and get the best of both worlds when it comes to a fixed-wing and a rotary-wing aircraft,” said CMDR. Keith Klosterman, the commanding officer of the NATSG.

"[The detachment was] able to operate out of Guantanamo Bay and that was due to the increased range and speed of the V-22. It doesn’t have the heaviest lift capacity in the fleet, but, compared with the speed and the range of a normal rotary-wing aircraft, the V-22 absolutely outmatches that, so they were able to base much farther away from the incident, but closer to the supply chain,” Klosterman added.

Though the V-22 Osprey is the Pentagon’s pioneering tiltrotor aircraft, it is likely just the first of several tiltrotors that will make their way into service. The U.S. Army is also researching a new aircraft that could replace the majority of the helicopters it has in service: the Future Long Range Assault Aircraft.

Both the V-280 Valor, built by Bell Textron, and the Sikorsky-Boeing Defiant X hope to win the competition and become the Army’s new aircraft of choice, hopes that are pinned on the demonstrated success of the V-22 Osprey.

According to the statement, the Navy and Marine Corps deployment flew more than “5,300 nautical miles, transported 320 aid workers and delivered more than 234,100 pounds of life-giving food, water, shelter and medical supplies in order to meet the needs of the struggling Haitian population.”