The Navy and Marine Corps Are Upgrading for China 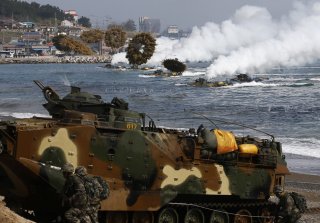 The U.S. Navy’s 6th Fleet, headquartered at Naples, Italy, stood up a new task force “to synchronize command and control of deployed Navy and Marine Corps amphibious forces and advance the integrated Marine Corps capability” within the 6th Fleet’s areas of operations.

According to a Navy press release, the new task force’s mission is to align “multiple existing deployed forces under the Naval Amphibious Force commander; [as well as] deployed amphibious ready groups (ARG), Marine expeditionary units (MEU), and reconnaissance and counter-reconnaissance (RXR) forces. They will oversee a wide range of integrated operations, from ARG-MEU operations, port visits and exercises, to contingency planning and RXR operations.”

The U.S. Marine Corps is currently in the midst of a transformational shift. Rather than effectively functioning as a second land army, the Marines are preparing for the future by keeping a weather eye on China and the Indo-Pacific region.

Commandant of the Marine Corps Gen. David Berger explained what the implications of the newly stood-up task force are.

“Force Design for us, is enhancing the capabilities for naval expeditionary warfare in actively contested spaces wherever those spaces might be,” Berger said. “Force Design, for us, is going to enable us to operate to fight, to win, in an even more diverse set of circumstances, regions, scenarios, than we can today.”

“Even more important, even more relevant is what they do to support naval operations,” Berger said during the Defense Program’s Conference, highlighting the Marine Corps’ tight relationship with the Navy— a relationship that has become closer and more interconnected than perhaps ever before.

“For example, Eastern Mediterranean—right now, while we’re sitting here in this room, there’s experiments going on between 2d Marine Division and 6th Fleet,” Berger said. “They have demonstrated that Marines can track adversary ships with targeting level fidelity.”

Furthermore, “we’ve even been able to contribute to anti-submarine warfare in the Mediterranean—unheard of, unthinkable for the Marine Corps five years ago. This fundamentally changes the game.”

In addition to working on interoperability testing and evaluation with the Navy, the Marine Corps is also introducing a slew of new equipment into service, including driverless, anti-ship missile-toting vehicles, a new Amphibious Combat Vehicle, and a new rifle.

Caleb Larson is a multimedia journalist and defense writer with The National Interest. A graduate of UCLA, he also holds a Master of Public Policy and lives in Berlin. He covers the intersection of conflict, security, and technology, focusing on American foreign policy, European security, and German society for both print and radio. Follow him on Twitter @calebmlarson.