Navy to Arm Carriers With 1,000 Fifth and Sixth-Generation Stealth Fighters 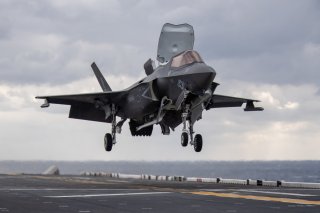 The U.S. Navy plans to arm its carriers with more than 1,000 fifth and sixth-generation fighter planes to sustain air superiority, improve sea-based power projection, and strengthen its maritime warfare posture for decades to come.

The Chief of Naval Operations Navigation Plan 2022 specifically calls for 1,300 “flexible, long-range and lethal carrier-based aircraft, consisting of a mix of 5th Generation manned aircraft and Next Generation Air Dominance Family of Systems.”

The language articulated in the text of Chief of Naval Operations Adm. Michael Gilday’s plan raises a number of pressing questions and interesting possibilities. For example, a close reading of the text suggests that sixth-generation stealth fighter aircraft may well launch from carriers much like the F-35C stealth fighter, something which clearly moves the now-airborne aircraft way beyond merely functioning as a next-generation, land-launched F-22 Raptors. This would make sense, particularly in the context of Gilday’s reference to a “family” of Next Generation Air Dominance (NGAD) systems, meaning sixth-generation aircraft will likely come in several variants to include a carrier-launched capability.

Second, Gilday’s text contrasts “manned” F-35 stealth fighters with a “family” of NGAD systems which might indicate that there will be “unmanned” variants in a group of networked sixth-generation platforms. This concept makes particular sense given the rapid progress in the realm of autonomy, artificial intelligence (AI)-enabled flight, and manned-unmanned teaming. A sixth-generation family of aircraft will likely include “drone” variants built to fly alongside manned aircraft. Multiple fifth and sixth-generation aircraft will increasingly operate groups of drones from the cockpit without needing to send data through a ground control station. This capability, which has already been successfully tested through U.S. Air Force programs such as Valkyrie and Skyborg, will likely continue to evolve to the point where manned fighters can operate small groups of semi-autonomous drones from the air, reducing latency and massively expanding operational scope.

Another interesting possibility suggested by Gilday’s language is that carriers will not only launch sixth-generation manned fighters but also sixth-generation drones. This is entirely feasible since the U.S. Navy has spent years developing, testing, and refining the technology needed to launch and land drones from the deck of a carrier. U.S. Navy developers have said that this process is extremely complex since autonomous systems must account for a number of interwoven variables such as wind speed, sea state, air turbulence, and glide slope dynamics. The U.S. Navy’s ability to do this goes back many years to the days of Northrop Grumman’s X-47B demonstrator drone which successfully took off and landed from a carrier. Following this, the U.S. Navy developed and is now producing a carrier-launched unmanned refueler called the MQ-25 Stingray which can launch autonomously from a carrier deck.

Given these technological developments, it makes sense that sixth-generation unmanned aircraft, and perhaps even drone variants, will take off, operate, and land autonomously on carrier decks.

It is also quite likely that sixth-generation aircraft will include an “optionally-manned” capability, meaning it can operate with a human pilot and also perform missions autonomously with AI-enabled algorithms. This concept is not new since unmanned fighter jets have been tested and in development for many years. For instance, in 2015 former Navy Secretary Ray Maybus said that the F-35 may be the last manned fighter. While Maybus’ comment suggests that unmanned air combat is expected to figure prominently in the future, there will likely still be a need for the faculties unique to human cognition to remain fundamental to air warfare. There are certain attributes unique to human decision-making that cannot be replicated by mathematically-oriented algorithms and machines.